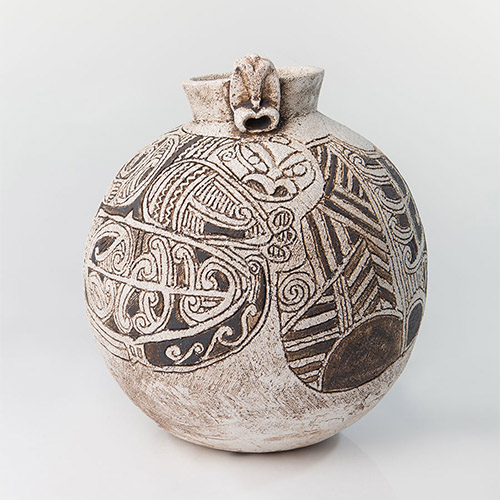 Often an artist’s work portrays their own life as much as it does the subjects they depict. This is true for Wi Taepa, an artist whose journey through life can be traced through the stories in his art.

Growing up in the decades following World War II, Wi Taepa experienced an era of rapid change. The conversion of Māori kāinga, from farming villages to urbanised centres, had a profound impact on him and his art. The American war in Vietnam, also a pivotal moment in his life, led to a lifelong affinity with the ceramic traditions of South-East Asia, Melanesia and the Pacific. These experiences and others helped shape Taepa’s artworks as much as they shaped him as a person.

The largest survey of Taepa’s practice to date, Retrospect looks back at over thirty years of art practice, focusing on the five major series of works he has created throughout his career. The exhibition tells some of the stories behind the works, giving us an insight into the man behind the sculptures.