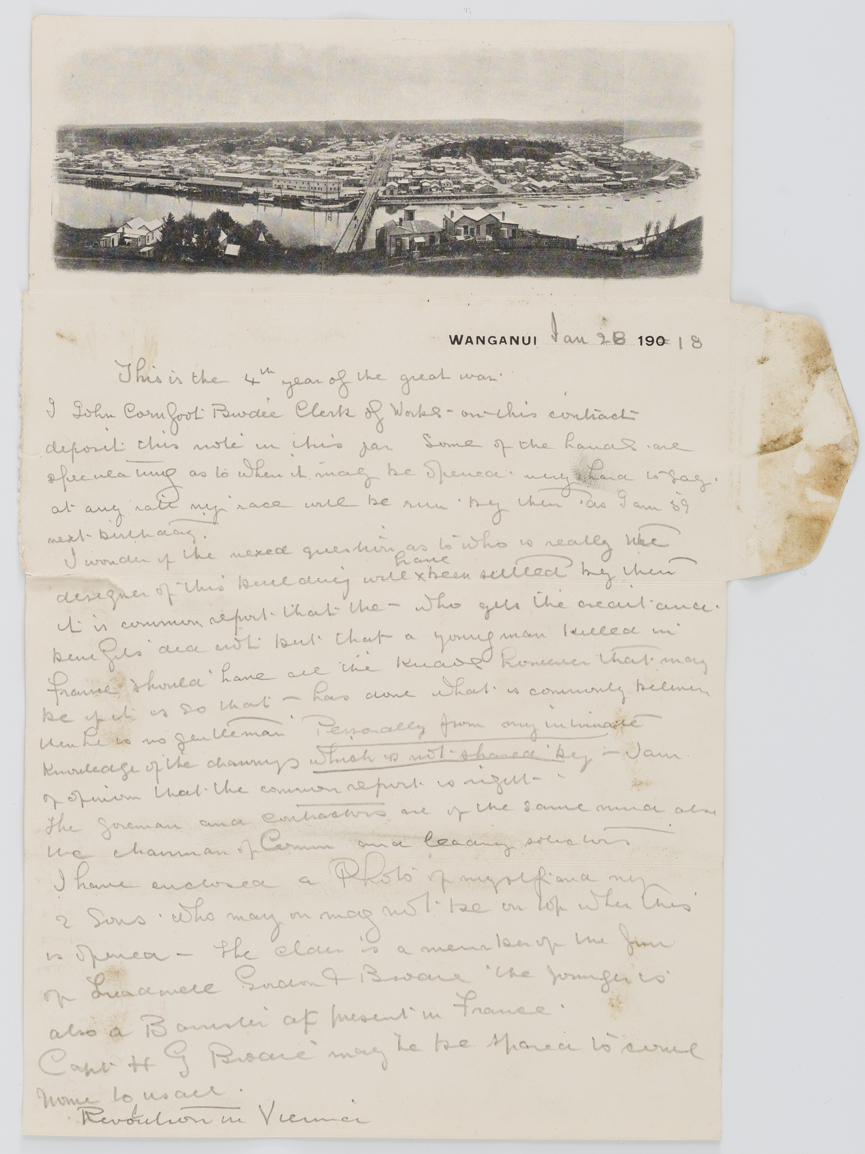 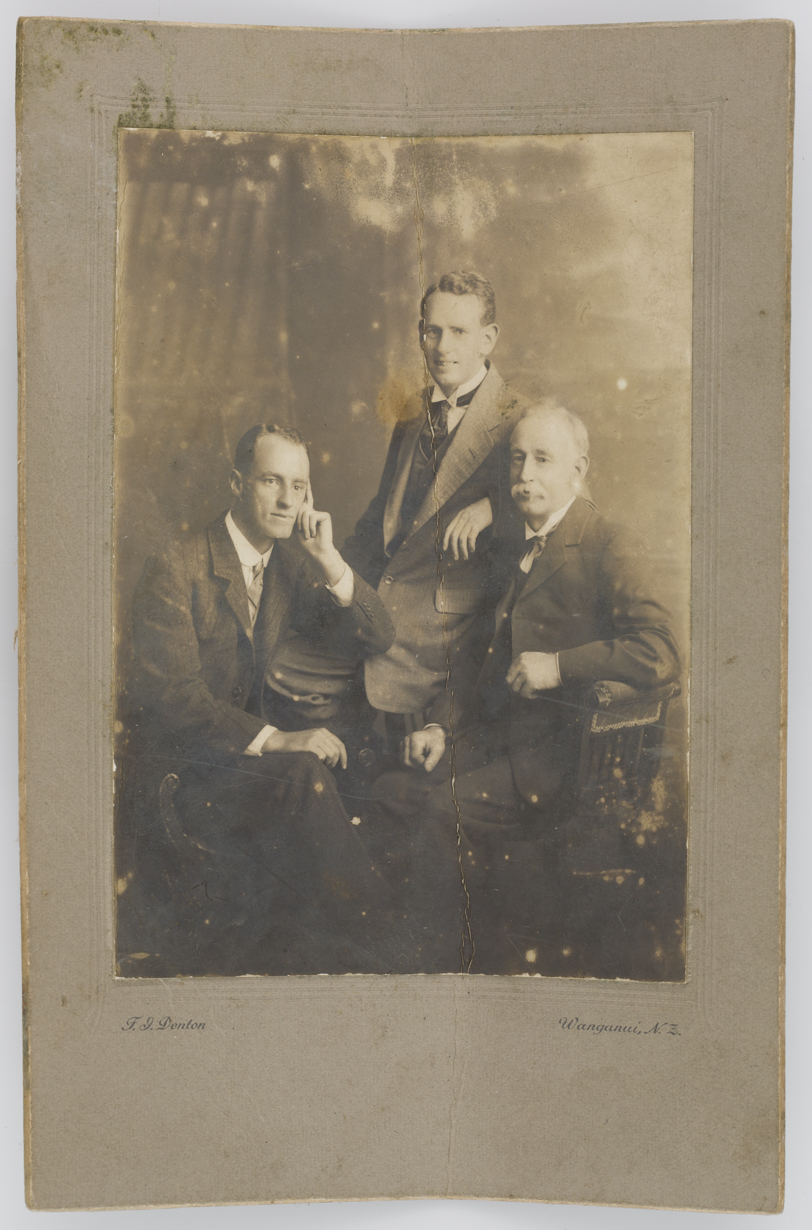 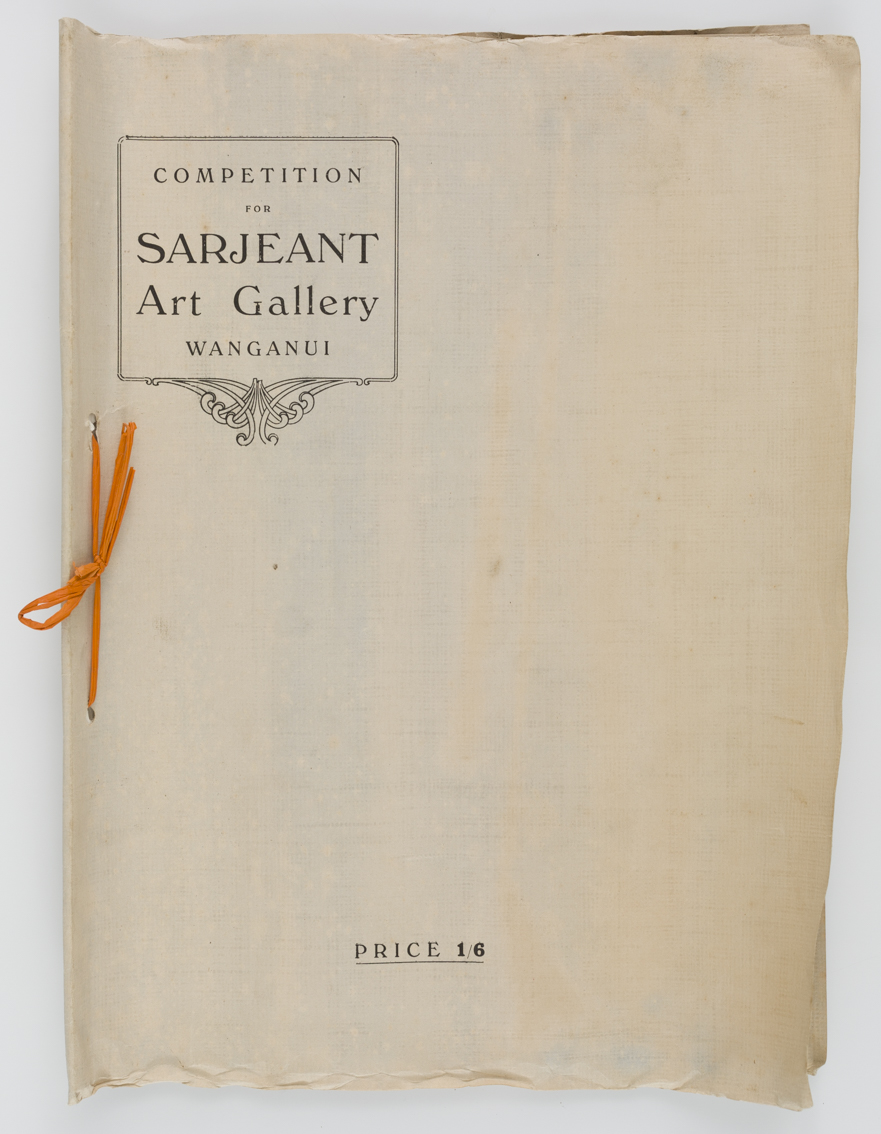 Richard Awa and the drill on the roof of the Sarjeant 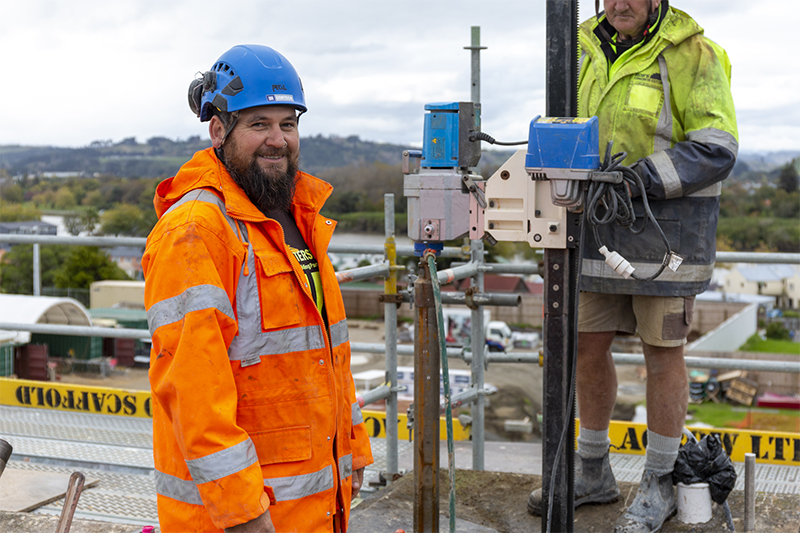 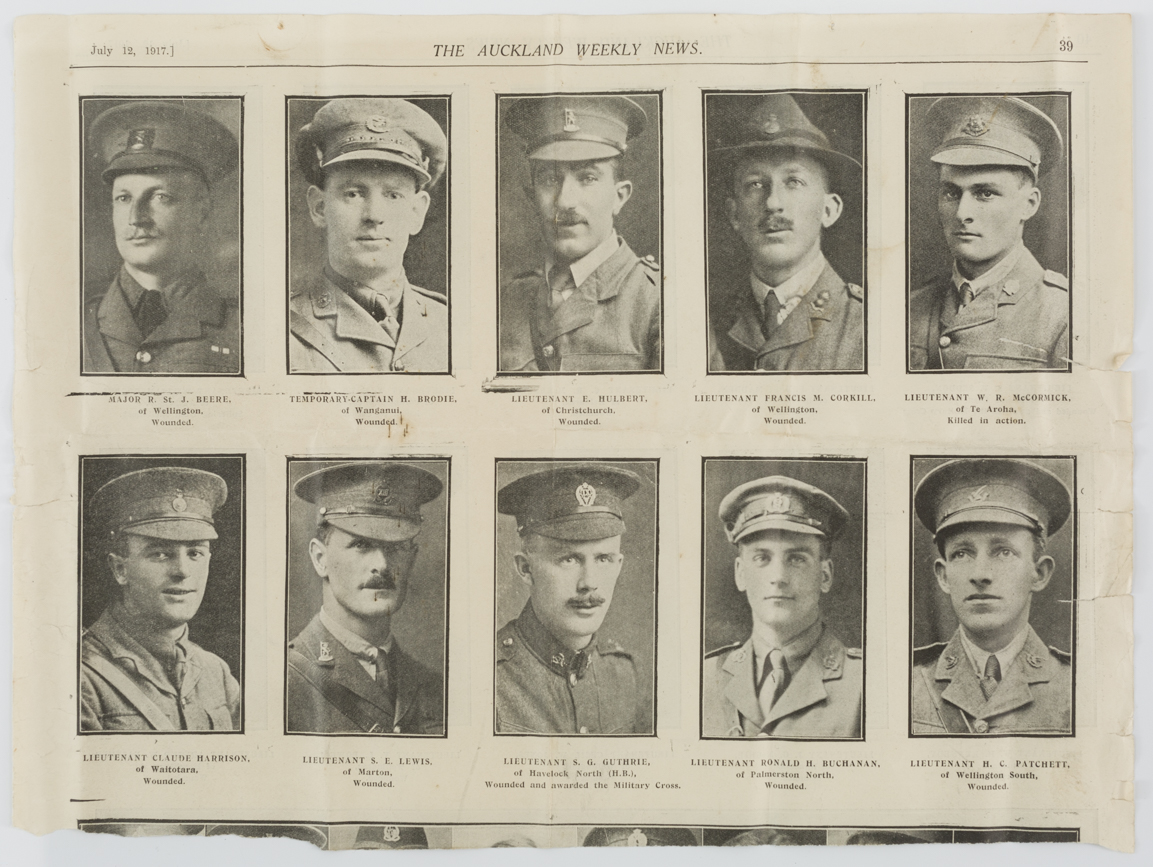 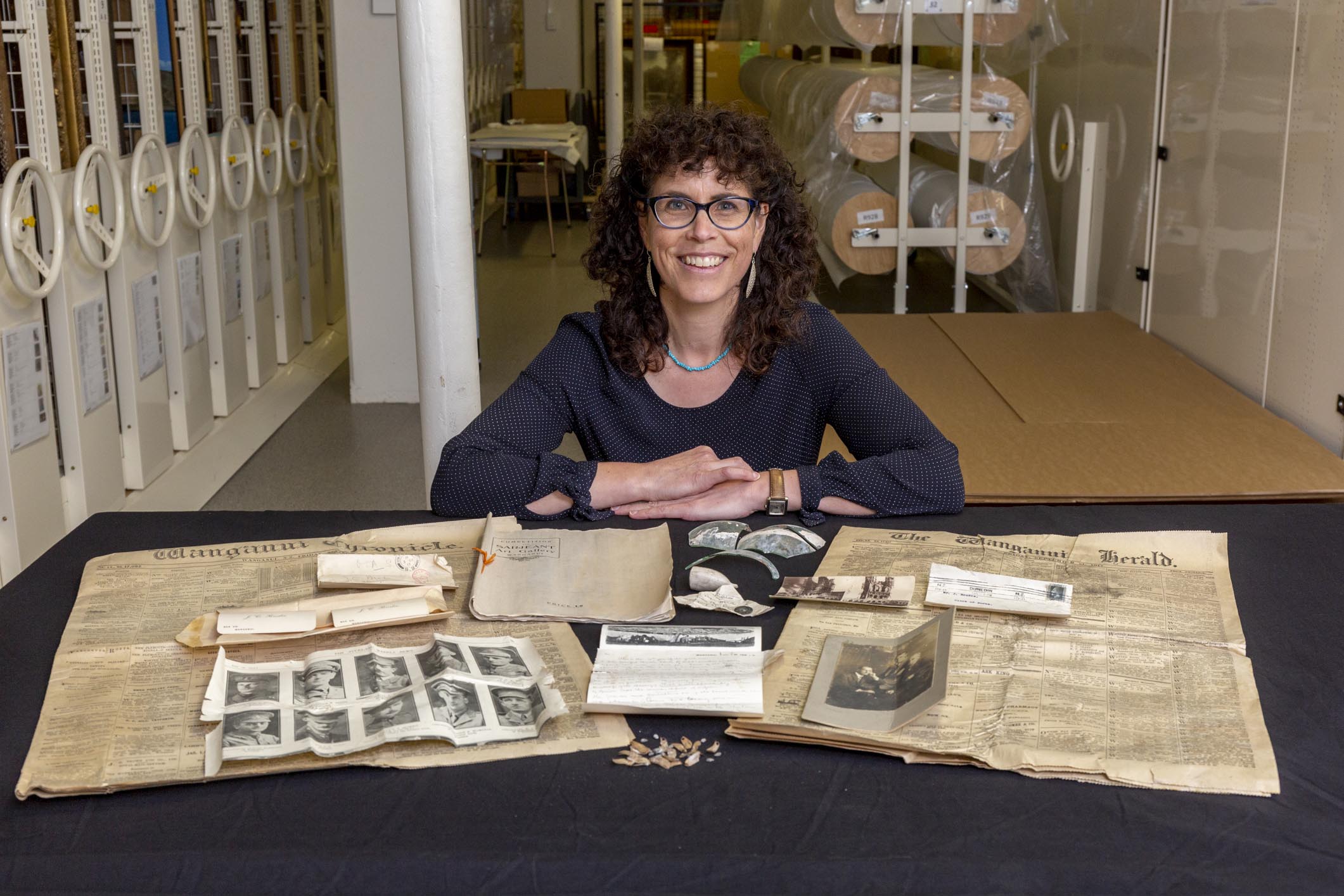 On 8 April 2021, while drilling inside the walls of the Category I listed heritage building for the earthquake strengthening post-tensioning system, the drill unexpectedly hit and broke a glass jar hidden out of sight inside the wall. Remarkably the jar contained a time capsule that had been placed inside a wall cavity 103 years earlier on 28 January 1918 by John Cornfoot Brodie (b.1859, d.1930) clerk of works and supervisor of the Sarjeant Gallery building project.

It quickly became apparent that this was not an official time capsule but instead a deeply personal selection of items relating to Brodie, his family and the Sarjeant building project.

The most significant item included in the time capsule is a letter written by Brodie, dated 28 January 1918, where he expresses his concerns regarding the lack of acknowledgement of the young architect articled pupil, Donald Peter Brown Hosie (b.1895, d.1917) from the office of Edmund Anscombe in Dunedin, who was responsible for the winning design in the Sarjeant architectural competition. Instead Anscombe took the credit for the design, declaring that it was his work and Hosie did not challenge him, stating that he ‘was a young man and would have his chance again’. Tragically Hosie was killed in the Battle of Passchendaele a mere three weeks after the laying of the Gallery’s foundation stone. In his letter Brodie is unwilling to write Anscombe’s name, so he uses a dash instead. “I wonder if the vexed question as to who is really the designer of this building will have been settled by then [when this time capsule is discovered]. It is common report that the __ who gets the credit and benefits did not but that a young man killed in France should have all the kudos however that may be if it is so that __ has done what is commonly believed then he is no gentleman.” He goes on to say that others including the foreman, contractors, chairman of the Committee and leading solicitors share his opinion.

Alongside the letter were family items of Brodie’s: a photograph by Frank Denton of Brodie with his two sons Archibald Douglas Brodie (b.1888, d.1966) and Henry George Brodie (b.1890, d.1963) who was at the front at the time; a postcard sent from France by H.G. Brodie in 1917; a clipping from the Auckland Weekly News dated 12 July 1917 featuring a photograph of Captain H.G. Brodie; and 2 of Brodie’s business cards. As well as items unearthed from the Pukenamu Queen’s Park building site: part of a clay pipe and a metal button possibly from the 58th Rutlandshire Regiment and the later Armed Constabulary stationed at the stockade on the site from 1847 – 1887; and 10 sycamore seeds.

Also in the jar was a rare Sarjeant Art Gallery architectural competition report, published December 1916, as well as a copy each of Wanganui Herald and Wanganui Chronicle, both dated 21 September 1917 the day after the foundation stone was laid at the Sarjeant Gallery site, with reports on the laying of the foundation stone and extensive coverage of the war.

Brodie was born at Hutchesontown, Glasgow, Scotland in 1859 and married Helen Gibson Hodges in 1881 at Victoria, Australia. He resided in Whanganui circa 1903 and had three surviving older daughters as well as two sons. On 2 June 1917 Brodie was announced in the Wanganui Herald as the clerk of works and supervisor for the construction of the new Gallery building ‘…Mr Brodie has had considerable experience in the building trade, and has supervised the erection of many large public buildings…’ Following the completion of the Sarjeant Gallery building, Brodie was also involved in the drafting of the initial and final designs for the Whanganui District War Memorial Tower on Durie Hill. His son A.D. Brodie worked as a Barrister in Whanganui and is the father of Whanganui-born artist Joan Grehan (b.1920, d.2007). A substantial body of Joan Grehan’s artwork is in the Sarjeant collection.

Contents of the time capsule discovered during the Sarjeant Gallery Redevelopment

‘This is the 4th year of the great war. I John Cornfoot Brodie Clerk of Works on this contract deposit this note in this jar. Some of the hands are speculating as to when it may be opened very hard to say at any rate my race will be run then as I am 59 next birthday. I wonder if the vexed question as to who is really the designer of this building will have been settled by then. It is common report that the __ who gets the credit and benefits did not but that a young man killed in France should have all the kudos however that may be if it is so that __ has done what is commonly believed then he is no gentleman. Personally from my intimate knowledge of the drawings which is not shared by __ I am of opinion that the common report is right. The foreman and contractors are of the same mind also the chairman of Comm[ittee] and leading solicitors. I have enclosed a photo of myself and my 2 sons who may or may not be on top when this is opened – the elder is a member of the firm Treadwell Gordon & Brodie the younger is also a Barrister at present in France. Capt HG Brodie may he be spared to come home to us all. Revolution in Venice’