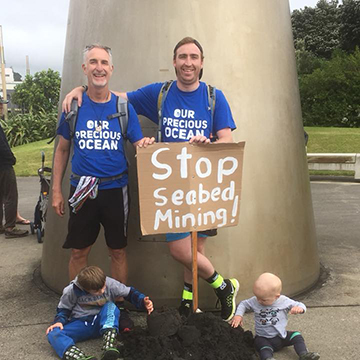 Dr Athol Steward’s 400km walk from Raglan to Whanganui was an exciting, informative and at times, death-defying experience. Accompanied by his sons Lloyd and Jonathan who walked 200km each, and supported by wife Lari who followed them in a campervan, Dr Steward set out to raise awareness about the issue of planned sea-bed mining along the West Coast of New Zealand.

The 16-day long walk, which was a many faceted experience, will be the topic of a talk at the Sarjeant Gallery, Sunday 18 February 2018 at 4.30pm, $5 entry, as part of Speakers for the Sarjeant series fundraising for the redevelopment of the gallery.

Dr Steward will talk about his adventures in a remote, rugged part of New Zealand unknown to most. The talk, illustrated by photographs, will range widely to include the issue of seabed mining and the environmental health of the planet. On a related and more personal note he will share his thoughts about healthy eating and the role of exercise.

His experience of the beautiful west coast and marine environment has invigorated Dr Steward in his campaign.

“The terrain was just stunning. We went through dense indigenous forest following old stock tracks. We got lost on a couple of occasions and ended up scrambling and falling down mountainsides through the forest on our way to Kiritehere, just outside Marakopa. There are stock tracks that were used in the 1800s and early 1900s and were the only way of getting through because the forest was so dense.”

They went through tunnels at Waikawau (70 meters) and 90 meter cliffs that had been hewn with pick and shovel through the mountainsides, to allow stock to access the beach. This was the easiest way of moving the animals because the forest inland was so dense in the late 1800s.

They clambered over rocks and boulders and saw all sorts of interesting things – gannet, tern, endangered crane colonies, seals and penguins, and the extraordinary Elephant Rocks at Tongaporutu north of New Plymouth.

“There was a surprise around every corner. To be so close to that environment for 16 days made me realise even more how valuable the marine environment is to all of us for many different reasons.”

There were a few “incidents,” which the talk will reveal. Not only did they swim across two harbours (Kawhia and Aotea) and various river mouths with their 40 litre backpacks, but Dr Steward and son Lloyd also found themselves at the end of one day’s walk between the proverbial rock and (in this case) a watery place.

“We got to the end of a very, very long day and at the end of this particular day, near the Waikawau tunnel we came across a cliff [that plunged] 40 foot straight down into the ocean to a rocky platform below. There was no way we could get across this cliff but we were so close to getting to our destination and it had already been a pretty eventful day. But we weren’t going to risk our lives trying to climb this cliff. My eldest son Lloyd was with me. After we looked at it for a while we decided the only thing we could do was to dive into the ocean with the waves crashing into the cliff and swim for our lives. Fortunately we got though all the breakers [avoiding being smashed against the rocks] and had to swim 70 or 80 meters out. Once we got beyond that we swam parallel to the coast and got onto the beach. Lari my wife was waiting for us there.”