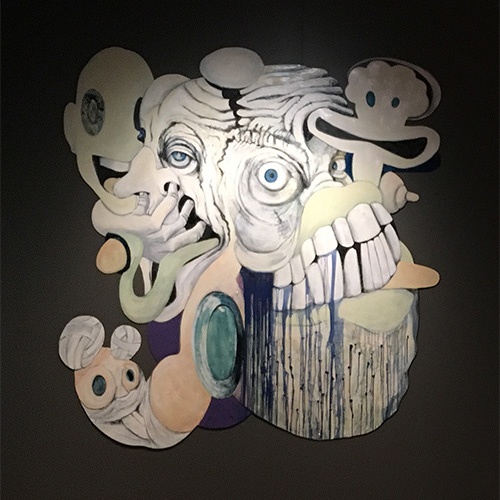 This exhibition is the latest instalment in the Collection Focus series and provides an opportunity to show recent additions to the Sarjeant Gallery collection, gifted by the artist Robert McLeod. The acquisitions are from McLeod’s Planetheads series (2013) and each artwork is named after a well-known painter.

Robert McLeod was born in Glasgow in 1948 and studied at the Glasgow School of Art. He immigrated to New Zealand in 1972 and spent more than three decades teaching art students at Wellington High School while painting and exhibiting his own work regularly. Much of McLeod’s earlier focus was on Minimalist and Expressionist Abstraction, as represented by Llush (1981), and later developed into the shaped, multi-layered biomorphic paintings that have become his trademark. McLeod’s first major survey exhibition was held at the Sarjeant Gallery in 1997 and the Gallery now holds 89 works in the collection, including paintings and works on paper, spanning nearly five decades of McLeod’s career.

The idea for the Planetheads first came about when McLeod worked on an installation for the large feature wall at Tauranga Art Gallery in 2012-2013. While he originally intended there to be nine Planetheads (in reference to each planet in the solar system) as the series progressed it became complete at just seven.

As an exercise in paint handling and a break from his other work at the time, McLeod stated that he really enjoyed working on the series and that ”A head is not a difficult proposition … unless it is a portrait … of an individual. That’s another set of problems.” During the working process the artist names (referred to in the titles) became ‘attached’ to the work, whether through the use of paint or colour, or anything that would jog a memory or obscure connection with the featured artist.

The Sarjeant Gallery has three of the Planetheads, Planet Edward (named after Norwegian painter Edvard Munch 1864-1944); Planet Janet (American Realist painter Janet Fish b.1938); and Planet Jeff (American artist Jeff Koons b.1955) while the remaining four are in the collection of Aratoi, Wairarapa Museum of Art & History.

Also on display are a small selection from a group of 27 untitled drawings (2003) which McLeod painted onto typeset pages from early book proofs of An Orange in a Fried Fish Shop: Paintings by Robert McLeod, published in 2002. These layered works with cartoon inspired imagery, gifted to the Gallery in 2004, are on display to the public for the first time.