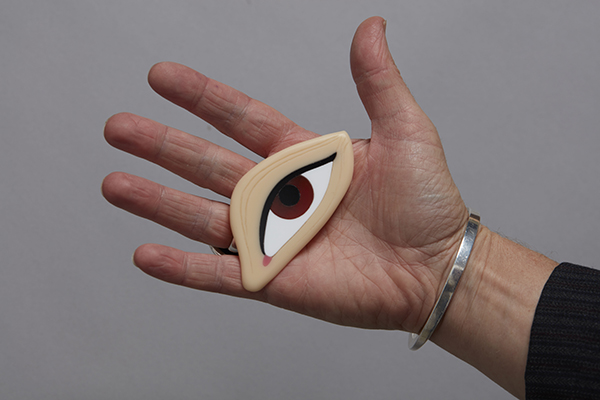 This exhibition includes a diverse range of works by artists who have not only made their objects by hand but have made things that could literally fit ‘in the hand’. As well as a celebration of the handmade, the works investigate the small objects we encounter in everyday life.

Artists Madeleine Child, Tessa Laird and Joe Sheehan create objects that invoke actions of the hand-held; to eat by hand, to read a book, to squeeze a paint tube or push the buttons of a remote. The objects alone, removed from their function still carry the connotation of ‘usefulness’.

Octavia Cook’s intricately fashioned Eyes series of brooches and earrings could be considered large in terms of jewellery, yet their palm-sized weightiness lends her pieces a delightful tactile element which might be lacking on a smaller scale.

Lauren Lysaght, Rob McLeod, Richard Parker and Martin Poppelwell are makers who have worked in both large and small formats throughout their careers. Included are a selection of objects that display echoes of their large-scale output, while remaining distinct and intriguing bodies of work in their own right.

Also featured are a selection of the smallest works from the Rick Rudd Box Collection, a rich collection of ceramics by a myriad of makers from around the country, acquired by the Sarjeant in 1999.

The selection of works in this exhibition are proof that artworks on a small scale can hold the same intrigue and impact as their much larger counterparts.