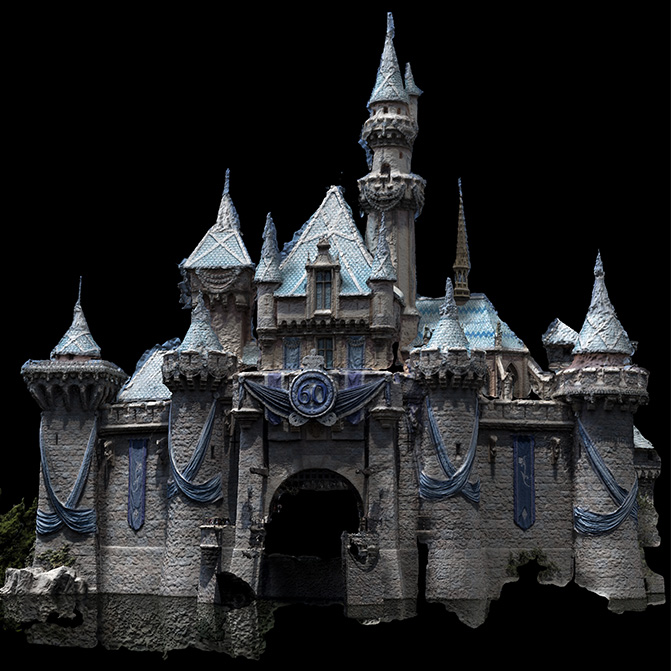 Heart rates may increase while viewing Brit Bunkley’s video Ghost Shelter, which is also the title of the multi-disciplinary artist’s installation of sculpture and video works that has just opened at the Sarjeant on the Quay, until 26 August. The combination of mechanical background noise and a camera that slowly circles derelict buildings and monuments creates a state of tension. It is however an experience the artist intends to be cathartic.

The video is a series of virtual flyovers of 3D scans of structures that have a deserted, end of the world atmosphere about them. The video is shown along with the 3D small-scale models that Bunkley has printed from the same digital files.

The artist travelled around Europe and America visiting sites that were “a little bit out there” – the ruined remnants of post-industrial societies, crumbling with neglect and so occupying a place “between culture and nature.”  Sometimes Bunkley was unable to mount his camera high enough on the buildings to make a scan, so he used a drone to take multiple photographs which he then converted into the 3D images we see in Ghost Shelter.

One of the buildings, Chemiewerk Rüdersdorf, is an abandoned chemical factory in the former East Germany, and another image is of Teufelsberg, a man made hill built on the rubble of World War II, which became a US listening station during the Cold War.
“Its history is very layered. A Nazi military technical college that was never completed is buried under the rubble of Berlin then the NSA (National Security Agency) built an echelon [high-tech information-interception system] on top of it. Now it’s a ruin where a lot of tourists go and a bunch of hippy permaculturists live around,” says Bunkley.

He created another eerie image of the Disney Castle, “the bright face of capitalism” and points out that Walt Disney attended Nazi Party meetings in the 1930’s.

“Scans, because they are imperfect and include little bits of sky and other background, create a 3D object that is a little bit scary. In a way [the Castle image] looks like it’s been dredged up from the bottom of the ocean.”

Architectural sculpture was becoming one of the mainstream forms of art during Bunkley’s time at art school in the 1970’s and 80’s. “I became interested in architecture in Europe that had something to do with the cold war and had a sinister, abject quality. So in 2015 I went to Berlin and began to search out these unusual buildings. At the same time I was working with the technology of 3D scanning of objects and decided to do that for large-scale buildings. This show encompasses work that has been done since 2016.”

The video component of the exhibition includes Six Sites depicting six post-industrial sites. One is of Immerath a town that was dismantled and partially relocated to make way for a coal mine. “I thought that was such a weird idea so I rented a car and drove all the way across Germany with my drone.”

The Stalker, is a series of sepia toned images taken mostly in water or underwater and again has the theme of nature taking over. It references the film “Stalker” by Tarkovsky, a Soviet director who made science fiction and surreal movies.

An accompanying display of wall fragments, blasted with bullet holes and shrapnel depicts another level of ruin. A pockmarked wall in the side of a chapel in Barcelona marks the place where 42 children died during the Spanish Civil War. Bunkley made full sized scanned models of the wall fragments and painted the pockmarks with gold to symbolise healing.

When the Sarjeant returns home to the iconic, redeveloped building, Bunkley says the extension will most certainly elevate its status. “It may well become a major player in New Zealand. The extension will have state of the art, new media facilities.”

Bunkley’s film Godzone has just been shortlisted for the Move Cine Arch Film Festival 2018 in Paris.

This story was first published in the Wanganui Chronicle on 5 June, 2018