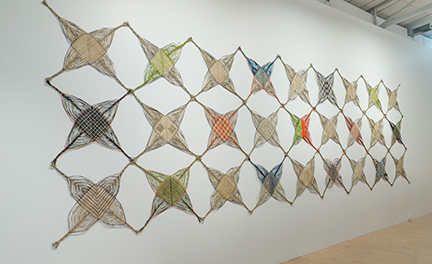 Three wonderfully woven installations by multimedia installation artist, academic and weaver, Maureen Lander is to grace the walls of the Sarjeant Gallery. In Flat-Pack Whakapapa, Ms Lander explores the connections between whakapapa and raranga (Māori weaving).

“It has been nearly thirty years since Maureen last exhibited at the Sarjeant Gallery with her wonderful dome installation Headwaters 1991,” and since that time she has had an illustrious career,” says Greg Donson. “Flat-Pack Whakapapa comes to us as a touring show from our friends at The Dowse Art Museum in Lower Hutt. We are thrilled to be able to show this dynamic new body of work in our temporary gallery space at Sarjeant on the Quay”

Ms Lander said that the ‘kitset’ pieces in two of the installations are like commencements for kete, “but the corners haven’t been made, they haven’t been made three dimensional so each of those becomes like a generation. If you think about the word whakapapa, which means to make flat or to make layers – it’s a bit like archeology and occupation layers in the ground. I’m kind of playing with words and ideas and the fact that people move around a lot now.”

Ms Lander will install Flat-Pack Whakapapa at the Gallery on 24 and 25 May and will be present for the Floor Talk on Saturday 26 May at 10.30am.

In the installations she brings together traditional and contemporary concepts of kinship, family and friendship networks as well as genetic heritage and linkages. She expresses her ideas about human connection from a mātauranga Māori (Māori knowledge) perspective, using the language and symbolism of weaving and weaving techniques such as whiri (braiding) and whakairo (patterning)—and the concept of aho tuku iho (ancestral lines handed down continuously from generation to generation).

“My work relates to place and ideas and I use those materials to articulate an idea. I’ve always been interested in my own whakapapa, and also, moving around, I’ve realised that whanau might be different in different places. People build up little whanau groups and that are ‘interest’ rather than ‘family’ based and that might be a contemporary idea of what whanaungatanga might be’ she says. Whakapapa, like DNA is always with whanau even when they travel and move away from their tūrangawaewae (the place they belong to through their whakapapa), hapū and iwi into the wider world.

Ms Lander said weaving with flax suits her practice. “I grow it and have it on hand all the time. Over the years I have created a symbolic language with it. It’s an incredibly versatile plant and I can push it in all sorts of ways.” One of her installations resembles long strands of DNA,something the flax lends itself to quite naturally.

Ms Lander learned from many different people, including noted weaver Diggeress Te Kanawa at Te Kuiti. However she said most of what she knows comes “from looking at old pieces in museums in New Zealand and overseas, and by experimenting with a lot of things that are not currently being done.”

When she taught Maori Material Culture at Auckland University she and her students recovered knowledge together. “A student might want to know how to make a particular crayfish diving kit like they did up the East Coast so he would research the one in the museum. With the skills I had I could help him work out how to do it.”

In recent times she has been doing “socially-engaged” work, involving communities in her work. She said art and art galleries bring people together, which is the case in the Hokianga where she lives. “Galleries that contribute the most, that I’ve had anything to do with, become a hub for the community in more ways than just the artworks.”

This story was first published in the Wanganui Chronicle on 23 May, 2018