Delving into the Deep
22911
portfolio_page-template-default,single,single-portfolio_page,postid-22911,bridge-core-3.0.2,qodef-qi--no-touch,qi-addons-for-elementor-1.5.4,qode-page-transition-enabled,ajax_fade,page_not_loaded,,vertical_menu_enabled,side_area_uncovered_from_content,qode-child-theme-ver-1.0.0,qode-theme-ver-28.8,qode-theme-bridge,disabled_footer_top,qode_header_in_grid,wpb-js-composer js-comp-ver-6.9.0,vc_responsive,elementor-default,elementor-kit-27794

Delving into the Deep

The Kraken is a legendary sea monster of immense proportions said to dwell off the coasts of Norway and Greenland and has provided inspiration for numerous stories, poems and artworks over the years.

The legend may have originated from historic sightings of giant squid, known to grow up to 15 metres in length. Currently on display at Sarjeant on the Quay in ‘Beyond the Frame’ is an artwork by Robert McLeod called ‘The McRaken Wakes #6’ that indirectly makes reference to this fascinating sea creature. McLeod was influenced by John Wyndham’s 1953 apocalyptic science fiction novel ‘The Kraken Wakes’ about an elusive alien race that takes up residence in the depths of the ocean and attempts to systematically wipe out the human race. (Wyndham is best known for ‘The Day of the Triffids’ which follows a similar theme). The inspiration for the novel was Alfred Lord Tennyson’s (b.1809, d.1892) sonnet ‘The Kraken’ which describes the shadowy sea creature “…From many a wondrous grot and secret cell, Unnumber’d and enormous polypi, Winnow with giant arms the slumbering green. There hath he lain for ages, and will lie, Battening upon huge sea-worms in his sleep, Until the latter fire shall heat the deep; Then once by man and angels to be seen, In roaring he shall rise and on the surface die.” 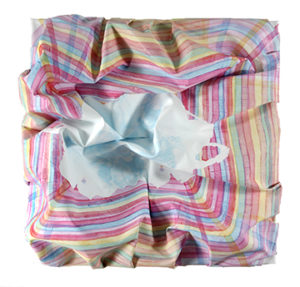 McLeod’s artwork is constructed of three wall mounted panels with a painted plank leaning against the wall. As well as Wyndham’s novel the work also pays homage to the American painter John McCraken (b.1934, d.2011) who’s signature form was a painted plank leaning against the wall at an angle. The placement of the leaning plank extends a traditional two-dimensional artwork into the three-dimensional realm and causes it to project outwards into the physical space of the viewer.

Other artworks in the exhibition ‘Beyond the Frame’ that create a similar effect include Miranda Parkes ‘Charmer’, 2009, and Don Peebles ‘Canvas Relief-Accord, Two’, 1989. These innovative works owe a debt to the ground breaking French art movement called Support/Surfaces (active in the late 1960s and early 1970s) who worked to reconstruct the foundational elements of traditional painting (the canvas and the stretcher) by freeing the canvas from the stretcher’s form. While Parkes does use a conventional wooden stretcher in ‘Charmer’, she employs it in an unconventional way by hanging a dramatically rumpled canvas onto it, making the painted canvas the focal point. In ‘Canvas Relief-Accord, Two’ Peebles cut the canvas and sewed it in repeated vertical strips that hang outwards, creating an organic form rather like a membrane or gills. The canvas ‘gills’ settle into flowing repetitive patterns, creating a sense of movement and flow across the work. 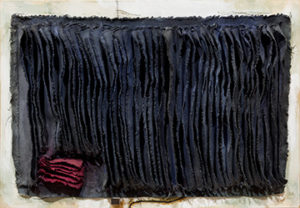 ‘Beyond the Frame’ presents a selection of works from the Sarjeant Gallery collection that push beyond the traditional rectangular form imposed by painting frames, and includes works by Philippa Blair, Gerda Leenards, Gavin Chilcott and Richard Killeen. Currently on display at Sarjeant on the Quay, 38 Taupo Quay, until 5 September 2018.

This story was first published in the Wanganui Chronicle on 19  June, 2018