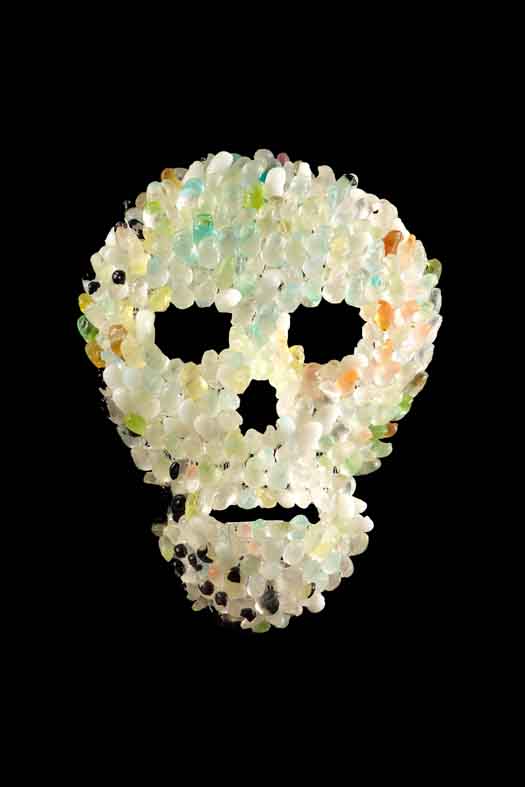 Since 2004, glass artists Jim Dennison and Leanne Williams have been making collaborative works under the banner of the ‘Crystal Chain Gang’ and Fancy Fools Flight is their first solo exhibition in a public gallery. Over the last seven years, the pair have not only challenged perceptions of cast glass practice, but have also pushed the boundaries with their choice of subject matter. Their first collaborative work entitled Slaughtered, was a life sized metal sheep carcass that was adorned with hundreds of small cast glass roses. Displayed in the gallery from a substantial metal hook as though it was hanging in a meatworks, the work was an elegant collision of butchery and beauty.

The substantial new body of work that forms the centre piece of this exhibition takes the idea of visual butchery into a whole other realm, here a collection of cast glass bottles are topped with stoppers that feature a line up of characters that are drawn from a rich visual memory bank, both real and imagined. Sourcing inspiration from second-hand shop finds and images from books, the pair literally re-mould these overlooked objects into new forms, punk them up, subvert them and make them foolish and heroic all at once.

The over-sized chandelier that is featured in this exhibition performs as any good chandelier should, it captures the light and has subtle tonal variation in its tiers. But look a little closer and you’ll see that rather than the regular cut glass that is normally found on chandeliers, this beautiful object is adorned with many press moulded glass wings and a central throat of cast-glass chicken feet, not quite what you’d expect to see above your head whilst eating your Christmas lunch.

The engagement with spaces is one that is critical to the pair’s practice, and a strong influence has been the zealous mania that occurred in the nineteenth century when many eastern palaces were not only sporting elaborate cut glass chandeliers but also balustrades, fireplaces and furniture. These were just one part of an overload of ornament, similarly for this exhibition, the Sarjeant Gallery’s beautiful neoclassical spaces provide a perfect foil for the work. Individual plinths have been abandoned in favour of a larger than life stark white table commissioned for the project.

Although cast glass is an incredibly present material, in that it is extremely heavy and solid, often the medium gets snared on its own physicality. For viewers it’s easy on the eye, processing the fall of light on an object and the way it occupies a room or a plinth is not too far removed from how we interact with much of the world around us. The phrases eye candy and sound bite in consideration of glass could be bandied about with much less objection and debate than if we were considering a painting or a sculpture. However, the Crystal Chain Gang certainly do not fall into this trap, sure they may get you with a punch of colour that can make you think of a bowl of peaches but look a little further and you’ll find something a little unexpected.

The bottles are based on the form of cut-glass decanters that are normally used to house alcoholic spirits, but these bottles could be seen to hold spirits of a different kind, as the pair said when they embarked on this body of work “the message is not in the bottle but it is the bottle itself”. The characters could be viewed as guardians of those spirits or they could be seen as the spirits themselves.

Many visitors will be very familiar with the form of these bottles in that they are modelled on cut glass decanter bottles that are normally housed in drinks cabinets.  In the hands of the Crystal Chain Gang, these subordinate and overlooked figures, are all punked pair have created work that has not only challenged the possibilities of the medium of cast glass also have incorporated other media and the expertise of other craftspeople to convey their message and pushed their practice beyond simply glass.

Meat and glass are not normally two words you would like to see associated with each other, but for their first collaborative work together, entitled Slaughtered, the pair made the association.