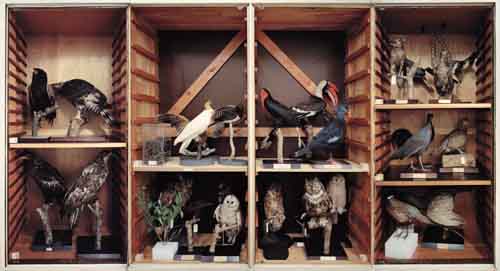 Glimpses into normally hidden spaces behind the scenes of New Zealand museums and galleries are offered by leading contemporary photographer Neil Pardington in his exhibition The Vault which features images revealing storage spaces that are normally closed to the public (including some at the Wanganui Regional Museum), exposing storehouses of memory and places filled with mystifying treasure.

They include photographs of animals and birds in taxidermy storerooms, paintings fastened to sliding storage walls, specimens in jars, rooms of mannequins, shelves of films in tins, taonga Māori, buildings full of army vehicles, textiles, card catalogues and much more.

“The Vault may be like a museum of museums, but it is also a metaphor for the idea of memory – both individual and collective,” says Curator Ken Hall. “Pardington’s gathering of storage spaces also suggests a vast collection of strange, unanticipated ‘found art’. Placed under a spotlight, the hidden back rooms and corners of our museums and galleries offer many thought-provoking and surprising tales.”

Hall also notes that Pardington’s association with museums began shortly after graduating from the University of Auckland’s Elam School of Fine Arts in 1984, through his employment as designer/photographer at the Sarjeant Gallery. It is here in Wanganui that he became more deeply involved with large-format photography and seriously entered the arena of graphic design (another field in which he is highly regarded). Also significant from this time is his sharing of a darkroom with Laurence Aberhart (the inaugural artist-in-residence at Tylee Cottage in 1986), who is acknowledged by Pardington as an important influence.

Pardington (Kai Tahu, Kati Mamoe, Kati Waewae, Pākehā) has exhibited nationally and internationally, and worked as a film-maker, artist and designer. One of his films has been shown at Cannes. He has steadily built a reputation as one of New Zealand’s most highly regarded photographers, and his work is now represented in many of the country’s major collections.