Euan MacLeod – The painter in the painting
21267
portfolio_page-template-default,single,single-portfolio_page,postid-21267,bridge-core-3.0.2,qodef-qi--no-touch,qi-addons-for-elementor-1.5.4,qode-page-transition-enabled,ajax_fade,page_not_loaded,,vertical_menu_enabled,side_area_uncovered_from_content,qode-child-theme-ver-1.0.0,qode-theme-ver-28.8,qode-theme-bridge,disabled_footer_top,qode_header_in_grid,wpb-js-composer js-comp-ver-6.9.0,vc_responsive,elementor-default,elementor-kit-27794

Euan MacLeod – The painter in the painting 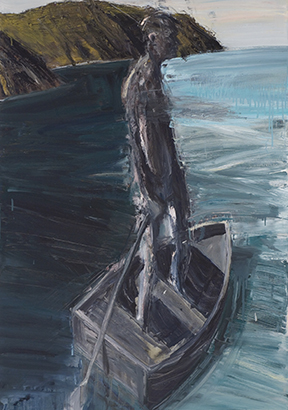 Euan MacLeod – The Painter in the Painting

‘The drama of Macleod’s life is all in his work—in the increasingly complex play of symbols that simultaneously conceals and reveals his thoughts and feelings, and in the energetic application of paint to a flat surface… He is a painter who finds his fulfilment in action rather than reflection. The imagery comes first; the meaning emerges gradually, almost reluctantly.’

In the tradition of John Mulgan’s novel Man Alone and the dark imaginings of Petrus van der Velden, Euan Macleod’s art strikes a particularly deep and resonant note in New Zealand. Although he has been based in Sydney for over 30 years, Macleod has constantly returned to the country of his birth. Alongside Australian images, ‘Euan Macleod–painter’ features works inspired by the Bay of Plenty, Waiheke Island, Castlepoint, Lyttelton Harbour and the Southern Alps—all of which highlight his complex and emotionally charged relationship with this country.

Euan Macleod paints himself into his paintings: He is the recurring figure in the landscape, or the artist at work en plein air; he is also the swimmer floating in aquatic space and the journeyman surveying expanses of desert or Antarctic ice. Beyond that, his expressionistic brushwork, using brush and palette knife, asserts his presence in the very pigment itself. Macleod paints from the core of his being, taking us into innermost regions of the human condition. His works explore states of youth and aging, the relationship between human body and environment, and the processes of memory and forgetting which shape both people and places.

Born in Christchurch in 1956, Euan Macleod completed a Diploma of Fine Arts (Painting) at Canterbury University. Moving to Sydney in 1981, he held his first solo exhibition later that year at Watters  Gallery, East Sydney. Just as his works are infused with landscapes from both his birthplace and his adopted home, Macleod has, throughout his career, exhibited on both sides of the Tasman. Since his Self-portrait; head like a hole won Australia’s most prestigious art prize, the Archibald Prize for Portraiture, in 1999, he has picked up numerous awards, including the Blake Prize for Religious Art in 2006 and the Gallipoli Prize (2009). Macleod is represented in public collections including the National Gallery of Victoria (Melbourne), Art Gallery of New South Wales, the Museum of New Zealand Te Papa Tongarewa and Christchurch Art Gallery. A monograph to accompany this exhibition, Euan Macleod—the painter in the painting, by curator/writer Gregory O’Brien, is published by Piper Press, Sydney.