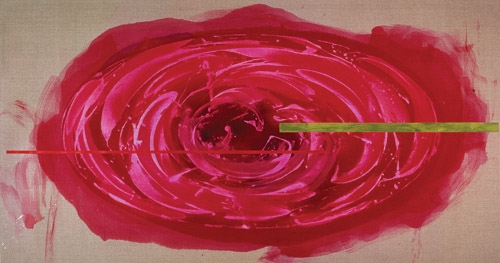 This exhibition brings together the work of six very different New Zealand artists. They work in a variety of media, covering the spectrum of current art approaches and is a grouping that has its basis in an exhibition – Ultramarte – that toured venues in Spain (Valencia and Palma de Mallorca), Hong Kong and finally, Tauranga. The new configuration places drawings by Richard Lewer and sculpture by Denis O’Connor alongside the photography of Fiona Pardington, and paintings by Gretchen Albrecht, Tony Lane and James Ross. The title of the exhibition, Diaspora – Pluralism and Singularity, suggests the theme and rationale for the selection, while Peter Simpson’s finely argued catalogue essay elaborates on this very eloquently: “So different are the visual languages employed by these artists that finding valid generalizations to cover their varied practices is a bit like trying to stretch a single-sized blanket over half a dozen bodies in a king-size bed. It can’t be done. But in this very plurality of medium, mode and manner is perhaps found the common thread that connects them . . . For whatever reasons, we have by now moved well beyond both the preoccupation with the national and the internationalist reaction to it. Contemporary practice, here (as almost everywhere), is simply too variable and multifaceted to be captured by any single model.” – Peter Simpson, 2009