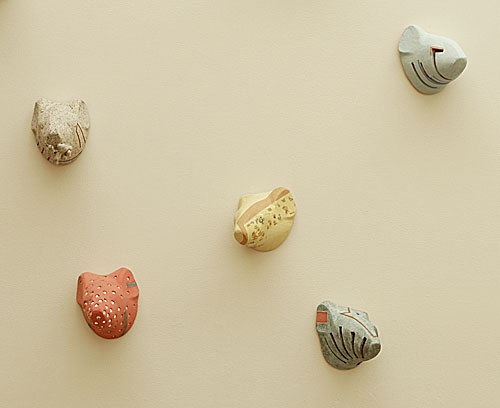 Glimmer was created by Tauranga-based ceramic artist John Roy and was first installed at the Tauranga Art Gallery in 2009. The wall installation is made up of fifty-one ceramic rodent heads, each virtually identical in its physical shape. However, each form is individual in its decoration. Each of the heads juts out from the flat wall, like a trophy. A rodent is a most unlikely candidate for a trophy and Roy likes the play on what is usually seen as a pest versus a prize. The irony is endorsed with the large number of heads included here and also the fact that they are invading an historic gallery. In proposing this work to the Sarjeant, Roy was interested in the notion of the installation occupying an unlikely space, here the installation spreads like a virus, half in the gallery space, and half over the thoroughfare of entry and exit to the gallery.

More often that not, ceramics are displayed on plinths, but here Roy uses the wall as his flat surface, meaning the works hang like paintings. This then raises the question of the status of clay work being a craft and not high art, as painting is viewed. The large number of rodent heads, all the same in shape, also alludes to the mass production of chinaware in factories, yet these heads are individually made and each has its own personality. For many, rodents are seen as a ‘glimmer’ out of the corner of one’s eye as they scurry about their business. Some of the rodents have sparkly jewels as part of their decoration, making them ‘glimmer’ in a bling-like manner, unlike their real counterparts. Two of the rodents of this installation have escaped elsewhere in the gallery, so look out for them as you move around the building.

John Roy was born in 1972 and graduated with a Bachelor of Fine Arts (Ceramics) from the Whanganui Polytechnic in 1997. His work is held in private collections as well as the Auckland War Memorial Museum and the Tauranga Art Gallery. He is represented by Masterworks Gallery in Auckland and the Mary Newton Gallery in Wellington. From February to April, 2011, he will be artist-in-residence at Tylee Cottage.