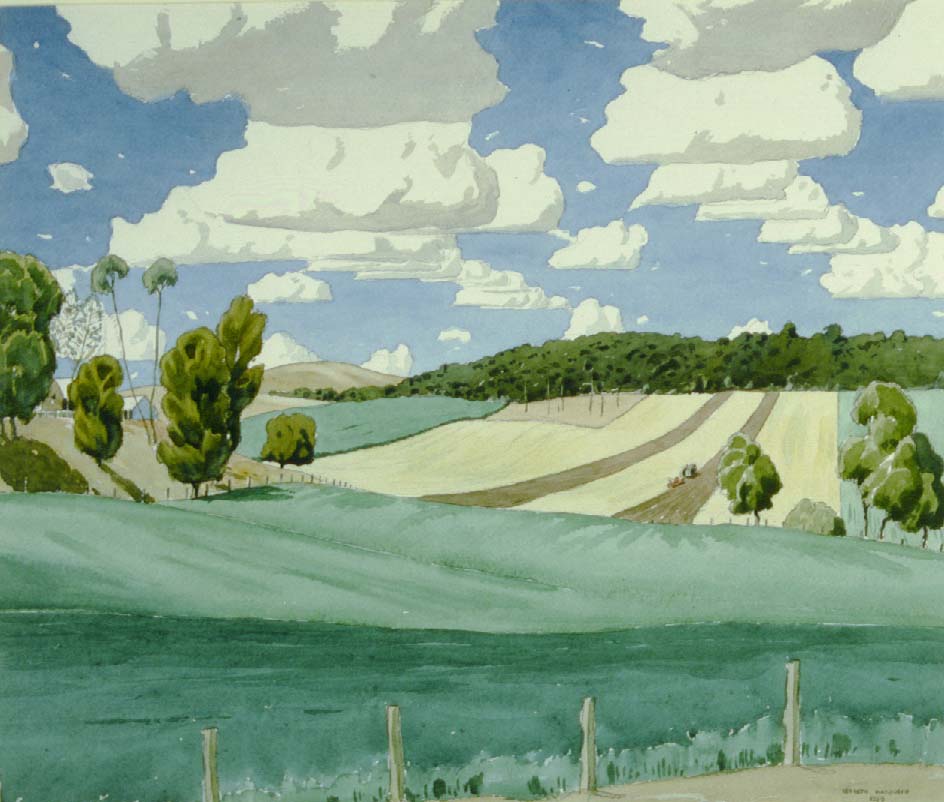 Artists throughout history have endeavoured to capture the beauty of the natural world. There have been countless representations of landscapes, real or imagined, which often feature the sky and weather to convey a certain mood or sentiment.

This exhibition, featuring works from the Sarjeant Gallery’s permanent collection, focuses on a specific meteorological feature that has incited daydreams, inspired poetry and been used as a mainstay in landscape depiction throughout art history – the humble cloud.

Some of the first artworks focusing on landscapes alone were Minoan frescoes dating back to 1500BC. In the European Medieval period landscapes in art all but disappeared, but there was renewed interest during the Renaissance with artists such as Leonardo da Vinci and Albrecht Dürer as exemplars of European masters producing intricately detailed landscape drawings, paintings and prints.

During the Dutch Golden Age of the 17th century, new painting techniques were developed for depicting the weather naturalistically. Painted during this era, Francesco Trevisani’s The Appearance of the Virgin to St. Maurice (circa 17th century) is an example of clouds being used in Baroque religious-themed paintings to depict heavenly realms.

As one of the most expressive elements of the sky, clouds have always been open to different styles and interpretation. The Romantic period of the early to mid-19th century saw artists exploring the emotive possibilities of the sky, as can be seen in George Cole’s Angry Clouds (circa 1853-1893), which features ominous clouds dominating an otherwise sparse landscape.

The advent of photography in the early 19th century allowed impressionist landscape painters the freedom to explore colour and light; rendering a feeling rather than straight representation. In a number of works featured in this display, the artist has focused on just a fleeting moment, or in some cases a graphic representation of the sky – flattened to colour and line as in Rodney Fumpston’s Sky – Marble Arch 7 (1976). John Coley’s Rain Rain (1968) uses the cloud as a pop art symbol for rain, which when placed with text can also be read as a speech bubble.

Some of these works found their way into the Sarjeant collection from France and England and belong to the European landscape tradition. Other works are uniquely of this place, and can attest to the Māori naming of New Zealand of Aotearoa, commonly translated as the land of the long white cloud.

The idea of a traditional landscape painting may now seem rather old-fashioned, and with the varied nature of current art practice including new media such as video, installation and performance; this interpretation is less common. But with a rich history behind these studies it is clear that the sky, and clouds in particular, are still inspiring art makers today.