Posted at 15:45h in Media Releases by xuyi
6 Likes
Share 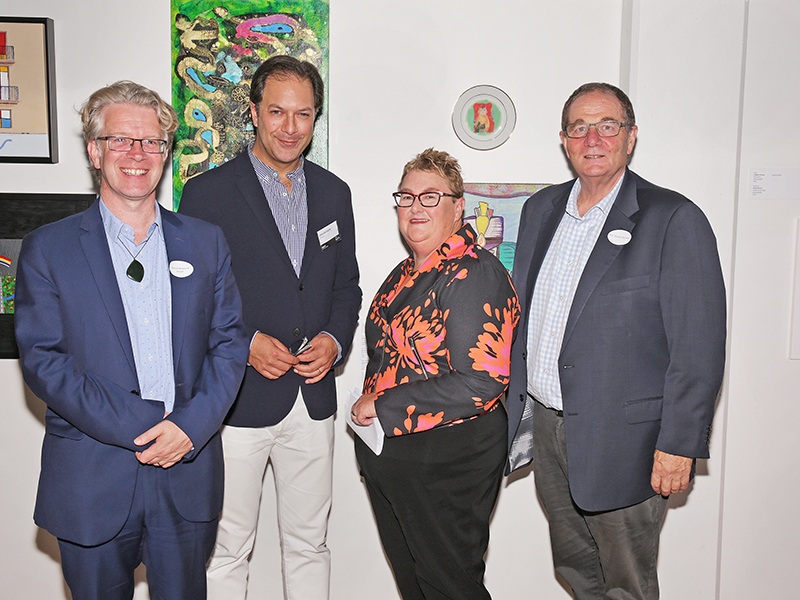 Supporters of the Sarjeant Gallery redevelopment project got a great big thank you last week from one of the project’s most generous supporters.

Wellington businesswoman Anne Pattillo is often asked what motivates her generous support of an ambitious multi-million dollar project to re-develop an historic art gallery in Whanganui where she has no obvious links.

The simple answer is that she has been captivated with Whanganui’s Sarjeant Gallery and its extensive art collection since she first set eyes on the building around 30 years ago during an unscheduled stop over in the city. “Here was this very beautiful, quite perfect building on the hill with an iconic nature that somehow draws you to it. “It had me – it was love at first sight,” she recalls.

Pattillo, who loved art but had no money to spare, marked the occasion by purchasing a postcard of an original art work that was on display at the gallery during her first visit.

“It is now very old but it has been on every notice board at any office I have had. “At the time it was all I could afford, and on one level it marked my first purchase of art.”

The former accountant returned to the gallery to visit exhibitions whenever she could. Years later, during a re-branding exercise after setting up Wellington-based management consultancy business – ‘pattillo’ – she decided to capitalise on synergies that she saw between the art world and her aspirations for the company.

“Artists, in whatever medium in which they work, are often grappling with challenges and the unexpected, where answers are not always obvious, which reflected what was important to how we did our work.”

The company brand – Sculpting Chaos – led to a decision to support emerging artists at a New Zealand art school.   Pattillo fixed on Whanganui’s UCOL art programme, The Quay School of the Arts, because of its good track record and the opportunity to exhibit work by students at the Sarjeant.

“There were clearly difficulties with the building, you could see the wear on the edges but it was still beautiful and having work on show there each year gave me a huge amount of joy.”

A restructure of the UCOL art programme some five years later saw Pattillo pull back from the scholarship.

When plans to restore and redevelop the aging earthquake prone gallery were put back on the drawing board five years ago, Pattillo decided to re-focus her energy on helping with the fundraising programme. “I saw it as an opportunity to sustain part of the heart of the city.”

She says Whanganui has a proud arts heritage and is a more affordable base for artists than larger centres. “A restored and redeveloped Sarjeant Gallery has the potential to become a hub for the arts community and the wider public.” Her decision to support the Sarjeant redevelopment reflects a long held view that major city galleries should not be seen as the main venues for showing and viewing significant art works. “New Zealand is a tapestry of different communities and residing the best art in buildings in cities just doesn’t feel right. “I believe having an art collection of international quality and being able to house it in a re-developed gallery with historic significance in a regional centre like Whanganui reflects the way New Zealand works.”

She says the gallery’s Thousand Stars Programme enables supporters to make affordable contributions of as little as $5 a week over four years towards the $35 million Sarjeant redevelopment, and has been a great initiative to support.  Along with pledging $10,000 annually to the Thousand Stars programme, Pattillo also hosts an annual function to thank supporters for their contributions which already amount to around $320,000. She has future proofed her contribution by joining up her five grandchildren and niece as STARS supporters.  At last week’s STARS function (Friday, March 24) Pattillo announced she was doubling her annual pledge to $20,000 for 2017, and urged others to do the same to help get the project over the line.

Three quarters of the $35 million re-development funding is now pledged – including $10 million of central Government funds that are subject to a final $9 million being raised by the end of 2017.

“It takes money to raise money, and I love the Stars function of connecting with people who have a continuing commitment to the project and the gallery,” she says. “It’s also an excuse to go to the Sarjeant at least once a year!”

Pattillo says Trust Chair Nicola Williams and her board, Gallery Director Greg Anderson and the gallery staff are the real heroes of this project. “But we are not quite there yet. “The challenge now for supporters like me wanting to see the development happen is to push a little harder on the wheel to get the job done.”