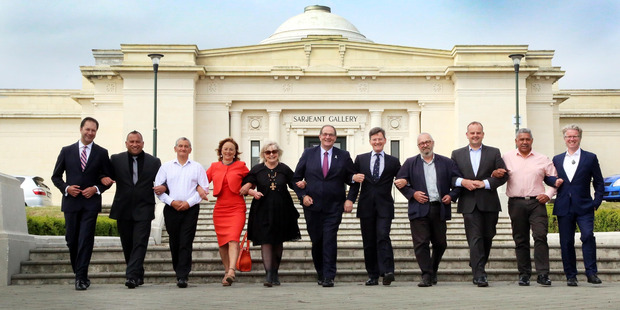 Posted at 16:26h in Media Releases by xuyi
7 Likes
Share

Whanganui MP Chester Borrows and Attorney-General Chris Finlayson join other dignitaries celebrating news of a $10 million Government funding for the Sarjeant gallery. Photo/Stuart Munro.
It has been the worst kept secret but confirmation that the Government will hand over $10 million for the Sarjeant art gallery project is the news supporters of the project were hanging out for.
And the Government’s largesse doesn’t stop there. It’s also giving $400,000 to the Whanganui Regional Museum to help upgrade its interior, install new climate control systems and improve the layout of the existing buildings while strengthening work, funded by the Whanganui District Council, is completed. Strengthening and extending the gallery on Queens Park is estimated to cost just under $35 million. The Sarjeant Gallery Trust and district council have together raised around $15 million towards the project. But the Government’s grant still has a string attached. Ms Barry said it was being made on condition the $10 million shortfall is raised by December 20, next year.

The news was delivered by former Arts Minister Chris Finlayson who has been a staunch supporter of the gallery earthquake strengthening and extension since it was first promoted. It was symbolic that he delivered the news in the shadow of the gallery on the War Memorial Centre forecourt. He was deputising for current Arts, Culture and Heritage Minister Maggie Barry who is flying back from Antarctica. Through her office Ms Barry said she was pleased Mr Finlayson and Whanganui MP Chester Borrows were making the announcement because both had worked tirelessly over many years in support of the Sarjeant and museum projects. Funding for the Sarjeant has come from the Regional Culture and Heritage Fund. The Sarjeant is home to a nationally significant art collection and is a category 1 historic place.

Mr Finlayson said Whanganui was home to institutions and taonga “that makes other much larger centres green with envy”. He acknowledged the work done by gallery trust board chair Nicola Williams and gallery director Greg Anderson for the fundraising efforts they had put in. Mayor Hamish McDouall said the grants recognised the national cultural significance of the gallery and the museum and were a welcome boost for the city. And he paid tribute to the Sarjeant trust’s success in raising $10 million in private funds which earned the matching Government funding.
Ms Williams said the trust was confident of raising the further $9 million needed to see the project completed and within the timeframe, saing the Government contribution “would open a lot of doors”. “The support we’ve already received has been part of a gradual and deliberate process that demonstrates the growing commitment to ensuring the Sarjeant remains one of Whanganui and New Zealand’s key cultural institutions,” she said. “A number of other funding applications are in the pipeline and Government’s offer is a huge boost for the project. The redevelopment has the potential to bring in millions of dollars to Whanganui and the trust is making every effort to ensure the project doesn’t incur any burden on ratepayers.”

Mr McDouall said the council would be fully briefed on the funding conditions very soon and formal resolutions would then need to be approved by the council.
– Wanganui Chronicle