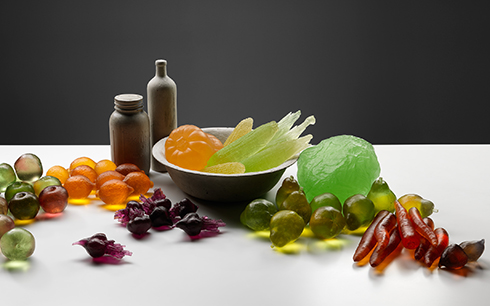 At the age of eighteen Wendy Fairclough left her hometown of Whanganui for a ‘wander around’ Australia and has since made it her home, settling in Adelaide. In the early 1990s she completed a Bachelor of Fine Arts degree in printmaking and sculpture at the South Australian School of Art. Subsequently she attended a glass blowing workshop with Nick Mount which motivated a return to Art School to study glass and from which she graduated with an Applied Arts degree in 2000. Since then Fairclough has been hooked on the magic of glass and has gone on to establish an impressive track record of exhibiting in Australia and overseas, her work is held in many private and public collections, including the national art collections of Australia and New Zealand.

Fairclough found that the medium of glass provided her practice with discipline, boundaries and physical challenges. The three dimensionality of objects in a space and in conversation with each other, has provided fertile ground for her work. Initially her chosen process was glass blowing but after a shoulder injury Fairclough needed the assistance of gaffers to bring her blown forms to reality. Although this had the benefit of being able to draw on the expertise of blowers with a higher level of technical knowledge than her own, she missed the hands on aspect of the process. Casting allowed a return to this and also the means to produce forms she simply couldn’t in blowing, Fairclough’s exploration of casting has led to her also utilising materials such as aluminium and concrete and more recently bronze in her installation-based work.

Although it’s easy enough to categorise these works as still lifes, we soon realise that they are anything but still. They are often imbued with memory, yearning and a desire to document objects from the world around her that are familiar. What Fairclough is interested in is the ‘common ground’ that connects us all. Divisive opinions around religion and politics are often at the forefront of our media saturated world and this has been something that has bothered and at times angered Fairclough in the political climate of Australia. Her response to this is to produce works that explore what we all have in common – the basic needs of food, warmth, shelter and connection.

In 2016 Fairclough was able to return to Whanganui to be the Sarjeant Gallery’s artist-in-residence at Tylee Cottage for six months. Her residency, supported by Arts South Australia and Creative New Zealand, allowed her to reconnect with her hometown for an extended period of time and gave her the freedom to work on an ambitious new project firmly located in New Zealand. This exhibition includes a new body of work that was conceived of before, during and after her time in Whanganui that explores food sources for both Maori and Pākehā during the time of settlement.

This is the first time that Fairclough’s works have been seen en masse in a New Zealand public gallery and the Sarjeant Gallery is proud to have mounted this exhibition, bringing home this artist’s poetic, beautiful and finely crafted work.