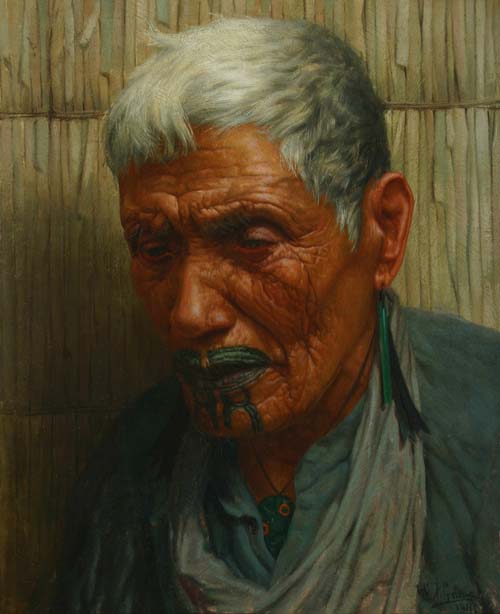 When Charles Frederick Goldie created his portraits of Māori subjects in the early Twentieth century he did so believing he was documenting a dying race. His paintings were going to serve as memorials to a departed race, and in a way they do. His portraits, like the paintings in this exhibition by Louis Steele, Charles Barraud and J. A. Gilfillan, act as painted memories of traditions, whakapapa and a unique way of life which is in many ways different from today. Coloured by each artist’s European heritage these paintings are romanticised views of ‘noble savages’ and curiosities. Absent from them is a uniquely Māori point of view.

Contemporary Māori artists question their place in the art world and the role Māori traditions and beliefs have in modern life. Cliff Whiting combines traditional carving with contemporary art aesthetics in Korero, Shane Cotton explores the role of landscape and language in Tera Tētahi Manu, while Darcy Nicholas in The Land is My Ancestor I and Emily Karaka withTangata Kore (Cut Off Man) explore whenua (land) and its complex place in New Zealand history.

Peter Robinson’s Untitled, from his percentage series of the early 1990s, is concerned with Māori identity and the idea that ethnicity and cultural identity can be arbitrarily determined by a blood sample. With his use of bitumen, a material used in roading, as well as the inclusion of a car in the painting, Robinson is questioning where identity sits in the modern urban environment, with so many Māori displaced from their marae and iwi, and the dislocation from shared cultural memories this brings.

Art is taonga, treasures which connect us to the past. Inanga, Heitiki, North Island (Toru Tekau ma Rua), Okains Bay Maori and Colonial Museum byFiona Pardington fits within the tradition of the photographic still life. However she is not interested in simply capturing the physical presence of taonga, but also its spiritual importance as a tangible link to the past.