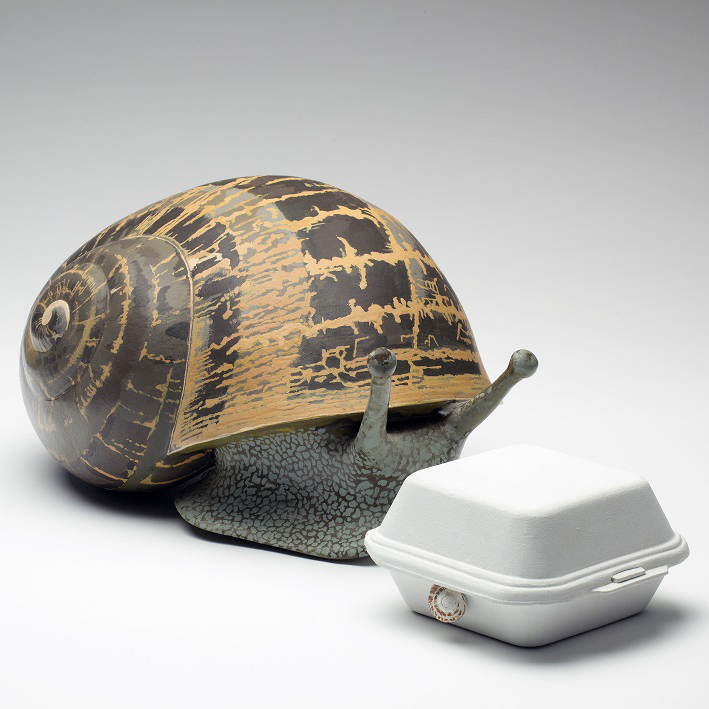 Glen Hayward’s  work has consistently been preoccupied with the back story of objects. Since graduating from Elam School of Fine Arts, Auckland University his source material has been the everyday – a study of pedestrian, occasionally ugly and mass-produced things. At first glance Hayward’s works appear as ready-mades in the Gallery space and are a little puzzling – why would someone place used buckets of paint, paint trays and rollers in a locked glass cabinet? But look a little closer and you will discover that everything on show has been painstakingly crafted and carved from wood and then methodically painted to be a replica of something deeply ordinary.

In 2014 Hayward returned to Whanganui, the town where he was born, to be the artist-in-residence at Tylee Cottage. During his residency Hayward’s attention shifted from recreating everyday objects to using found objects and detritus as the material for a new body of work. In doing so he has taken overlooked items and made them newly visible as hybrid forms. The hand and eye of the unknown maker is both obscured and amplified by Hayward’s additions and subtractions.

Super ordinary features a selection of Hayward’s works produced since 2000 alongside the new body of work. What can be seen in surveying his practice is that Hayward is an artist who has mastered his chosen medium. The type of wood he uses is entirely dependent on what he has had to hand or what the object he wishes to make requires, sometimes this could be a beautiful piece of native timber like rimu or kauri and on other occasions he turns his hand to the ultimate fraudster in wood – MDF. What wood offers Hayward is a more conversational approach to his work, he can return – he can subtract but he can also add over time.

Although man-made objects have been the primary inspiration for his work Hayward has turned his attention to the natural world, the exhibition features two intricately carved rat skulls, a giant snail and a circular log that is like an ouroboros (the ancient symbol depicting a serpent eating its own tail). The sap of this freakish log would be cyclic, constantly churning around and around and in turn the log gets thicker and the diameter of the circle gets wider. A little like Hayward’s practice, his circle of vision gets wider and more objects at the fringes capture his attention for their super ordinariness.