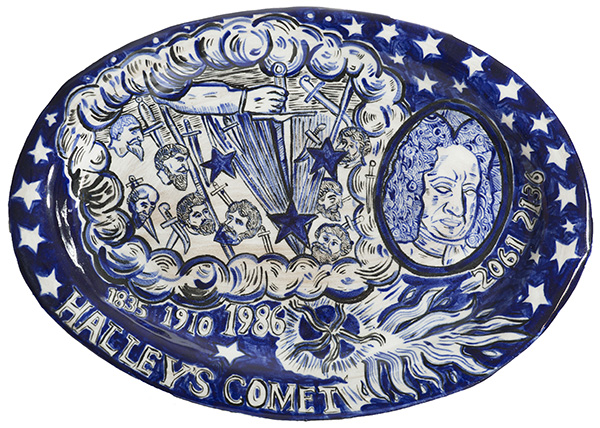 2016 marks a significant milestone in the history of the Sarjeant Gallery’s artist-in-residence programme at Tylee Cottage. It is thirty years since the residency began with the inaugural resident being photographer, Laurence Aberhart in 1986. Since that time over fifty artists have participated in the programme which has been mutually beneficial for both participating artists and the Sarjeant Gallery and the wider community. The residency allows an artist to focus solely on their practice with one of the aims of the programme being that the incumbent produce a new body of work that somehow reflects elements of local history or is a product of their new physical surroundings.

Auckland-based artist Sam Mitchell came to Whanganui for four months in 2015. For her new body of work she chose to consider what events of note took place in 1986 – the anniversary of the Tylee residency. The hand painted ceramic works that resulted are like diary of that year laid out like a dinner party with events such as the NASA Challenger and Chernobyl disasters being noted alongside historic milestones such as the Homosexual Reform Act and Halley’s comet.

Within the body of work a number of Whanganui sites are referenced and in others Mitchell creates her own narratives, the prevalence of Lion monuments and the nearby Red Lion Inn are a recurring motif. In amongst the plates and platters of the table are a number of disparate objects – a bust of Whanganui-born Douglas Lilburn, E.T and a mysterious opium eater, inspired by local reports of public plantings of poppies being stolen in 1986. Mitchell was a teenager in 1986 and the table is littered with cassette tapes providing a kind of unseen soundtrack to this haphazard table setting. The title for the exhibition Beards, Boys, Platters, Shattered Dreams could almost be the title of a 1980s ballad.

For two months of the residency Mitchell was joined by fellow Aucklander, Gavin Hurley. Having collaborated on projects before, the residency was the perfect opportunity to explore a collaborative approach in a new setting, creating two separate bodies of work that run parallel to each other but also overlap. 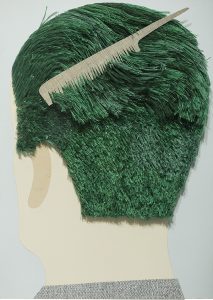 Hurley’s practice includes both painting and paper collage which has in the past featured found imagery which is used as both source material and as inspiration. In Whanganui Hurley worked on a series of twelve ‘bearded boy’ portraits, these works are all modelled on an old school photograph that Hurley found in New York of an unknown school boy. In this series this boy takes on a different personality with the addition of a borrowed beard, moustache, stubble or impressive mutton chops. These works were produced using a self-taught technique using cotton thread that Hurley has developed. The line-up of personalities depict men from Whanganui’s past including John Ballance (1839-1893) and Henry Sarjeant (1829-1912) alongside former artists-in-residence at Tylee Cottage – Glen Hayward (2014) and Laurence Aberhart (1986).

In two of the portraits, the innocent looking boy doning someone else’s facial hair is further disguised with the aid of tattoos inked by Sam Mitchell. Also featured in the exhibition are a swarm of moustaches that are stitched into the surface of locally sourced postcards where Hurley occasionally adds his own notes ….“A man crosses Ridgway Street.

Beards, Boys, Platters, Shattered Dreams is an immediate response to a place by two artists each coming to Whanganui with a fresh set of artistic eyes. This exhibition adds to an important legacy of post residency exhibitions for which this gallery’s programme and collection is all the more – richer for.