SOMETHING IN THE WATER
15911
portfolio_page-template-default,single,single-portfolio_page,postid-15911,bridge-core-3.0.2,qodef-qi--no-touch,qi-addons-for-elementor-1.5.4,qode-page-transition-enabled,ajax_fade,page_not_loaded,,vertical_menu_enabled,side_area_uncovered_from_content,qode-child-theme-ver-1.0.0,qode-theme-ver-28.8,qode-theme-bridge,disabled_footer_top,qode_header_in_grid,wpb-js-composer js-comp-ver-6.9.0,vc_responsive,elementor-default,elementor-kit-27794

SOMETHING IN THE WATER 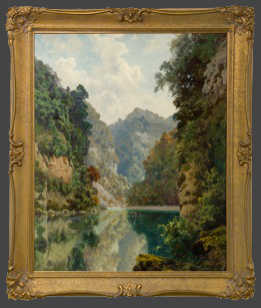 The first section features the work of a number of artists whose work and reputation has survived and strengthened despite their passing. Edith Collier’s standing as one of this city’s most significant artists is reflected in the Sarjeant’s on-going commitment to having her work on permanent display. In this exhibition a selection of works have been made that are indicative of key periods in her career, in the United Kingdom in London and St Ives and her return to New Zealand where her focus was primarily centred on landscapes.

Norman Hurn, Joan Grehan, Barbara McPhail and Neville Mawhinney were all resident in Wanganui in recent years and although their work may not have made a splash on the national art scene or have been shown widely in public art galleries, they all made valuable contributions to the local arts community and each of them are included in the Gallery’s Collection. Each had an entirely different focus in their practice and are represented here by works that are indicative of some of the finest examples of their output.

Joanna Paul (1945 – 2003) was resident in Wanganui from 1984 and, during her time here, the Gallery acquired some fine examples of her work for the Collection. Plato’s Cave / Wanganui River, 1987 is Paul at her best and this work is also a touchstone for the title of the exhibition. Paul’s ‘something in the water’ is the slightest of lines and reflections from sky and the surrounding riverside.

The second section of the exhibition features the work of artists who moved to Wanganui and have remained for a variety of reasons – employment, the arts community, environment or as artists-in-residence at Tylee Cottage. Each of these artists are represented by works from the collection and these are complimented by contemporary works that are indicative of their current focus. The artists included are Brit Bukley, Sue Cooke, Andrea du Chatenier, Peter Ireland, David Murray, Prakash Patel, Paul Rayner and Rick Rudd.

To conclude is a portion of the Gallery space focusing on the work of a number of artists who have spent time in Wanganui as artists-in-residence at Tylee Cottage, with the exception of photographer Neil Pardington who was employed at the Sarjeant Gallery in the 1980s. All of these artists, (excepting our current artist-in-residence, Ann Shelton) left Wanganui but their time here is marked by a selection of works that have come into the Collection and are indicative of the productivity experienced when people come to Wanganui as the artist-in-residence. Mervyn Wllliams, Julian Hooper and Charles Butcher all created bodies of work that were indicative of a shift in each artists oeuvre.