Artist Peter Trevelyan teases notions of perception and how we make sense of the world
24096
portfolio_page-template-default,single,single-portfolio_page,postid-24096,bridge-core-3.0.2,qodef-qi--no-touch,qi-addons-for-elementor-1.5.4,qode-page-transition-enabled,ajax_fade,page_not_loaded,,vertical_menu_enabled,side_area_uncovered_from_content,qode-child-theme-ver-1.0.0,qode-theme-ver-28.8,qode-theme-bridge,disabled_footer_top,qode_header_in_grid,wpb-js-composer js-comp-ver-6.9.0,vc_responsive,elementor-default,elementor-kit-27794 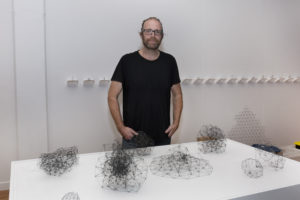 Trevelyan’s exhibition Delineate is on at Sarjeant on the Quay until September 1, and it brings together Trevelyan’s new sculptures, along with selected works from the last 10 years.

Trevelyan also uses paper, plastic, glass and other media. Some of his works measure several metres, others are small, but they are all intricate, both in concept and construction.

The structures are, as he says, drawings that have had the paper removed, and they are calculated to challenge how people see the world.

“I am drawing in space. All drawing has its support whether it’s pencil or pen on paper. The paper has been removed – so I see drawing as almost a preparatory ritual for affecting the world somehow. People plan buildings and plan societies so there are always drawings for that.”

“This drawing has kind of had its bluff called and it’s like, all right then go and sit in the real world and exist. So it has this fragility to it and is, I think, a really unlikely thing to be here and exist. I think the fragility of it and the precariousness of this system [like many human constructs] carries the message.”

Plastic is another seemingly fragile material he experiments with, and much of his new work is in very fine reused plastics such as styrene rods.

He makes the thin lengths of plastic himself by heating and drawing it out by hand.

“I am always looking for a new material to try out. And reading so much about plastic and how it operates in the environment, the way it is the same sort of chemistry as us, the way it is a byproduct of the oil industry – it seems to be a fascinating material to try and use right now. The pencil leads are geometric and ideal in their precision whereas plastic is a much more organic, even biomorphic way of building.”

Plastic, a byproduct of the fossil fuel industry is seen as valueless, disposable and cheap, he says. It is invisible to the naked eye at a molecular level and permeates the environment.

“I can’t stop thinking – plastic is all through bodies and the food chain; plastic is in the clouds – everywhere”

He likes the lack of reality and solidity of some of the works, and the varied reactions they evoke.

“Occasionally people mistake the pencil lead works for holograms and don’t think they are real. The plastic is even more subtle and discrete. I like the idea of building quite large intricate structures that you may not even realise are there until you are quite close or even entangled in – like spider webs.”

The exhibition includes photograms produced by placing structures directly on photographic paper. There is no camera and light is shone directly onto the object and paper to produce an image.

With a lot of his fine works and detail he is trying to tease people’s notions of perception and the way we see and sense the world.

This article first appeared in the Whanganui Chronicle on Tuesday July 9, 2019