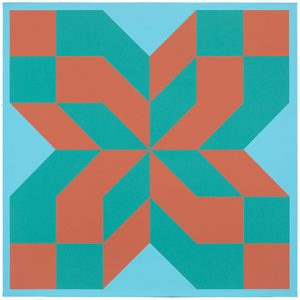 An exhibition of massive, colour-filled abstract paintings, book ended by his signature optical works form a New Zealand artist Mervyn Williams is showing at the Sarjeant on the Quay until 9 September.

The exhibition spans Williams’s career from 1976 through to 2017 and celebrates a recent, and significant gift to the Sarjeant Gallery by the artist and his family, who are generously gifting his works to public galleries with whom Williams has had a long association with.

Williams is renowned for his boldness and dedication to originality, and the newly gifted works on display at the Sarjeant are testament to this. Says Williams, “An artist’s significance must be measured by their powers of invention, by the originality and uniqueness of their work. Without this the work is merely imitation”

Williams’ association with the Sarjeant began in 1988 when he was the third artist in residence at Tylee Cottage. During this time he made a shift from painting to working with driftwood which he found when exploring the Whanganui river mouth and beaches.
The artist recalls his time in Whanganui as being an important turning point in his career, saying, ”All my preconceptions about what I might do here … were completely tipped upside down when I discovered what it was like to get out of an urban area and actually work in a very open space”

Greg Donson who curated the current exhibition says Williams has always been a maverick in New Zealand art history. “From the beginning of his career in the 1960’s he made a commitment to creating abstract work even though his optical works were received with some disquiet by the art establishment and bewilderment from a wider public”

“What appealed to Williams about optical work in the 1960s was that it made abstraction a little more accessible to people because these works played tricks on your eyes, they hummed and were about patterns, whereas the abstract expressionism of someone like the American painter Mark Rothko, was harder to take. But that didn’t mean his work wasn’t met with a certain amount of consternation . You have to sit with them for a while.

And they do change quite dramatically as well.”

Williams, who is nearly 80, lives in Auckland and has a large studio there. Donson says he is currently working “actively and obsessively” on three dimensional concrete and bronze constructions. This new artistic divergence was inspired during a world cruise.

“He took a whole lot of cardboard tubes with him and started making little modular constructions in his cabin while he was looking out to the vast sea from his cabin. Now it is coming to fruition in concrete and bronze. He is still in the process of working out how to make them in collaboration with other people. It’s another exciting shift in his work.”

Thanks to the recent gift, the Sarjeant now holds nearly forty of Williams’s artworks, which may eventually become the subject of a larger exhibition once the Gallery is back in the redeveloped building in Queens Park.

“Mervyn is very fond of that building and of Whanganui. I have been talking to him for over a decade about the idea of a larger scale survey show. It’s better to do these things while people are still around.”

He says that Williams is one example of a group of artists who have been extremely generous to the Sarjeant.

“Without that generosity and these ongoing relationships, we wouldn’t have had a chance of building up significant holdings of individual’s works which further enrich the Sarjeant’s permanent collection”

This story was first published in the Wanganui Chronicle on 14 August, 2018