Richard Wotton retires from the Sarjeant 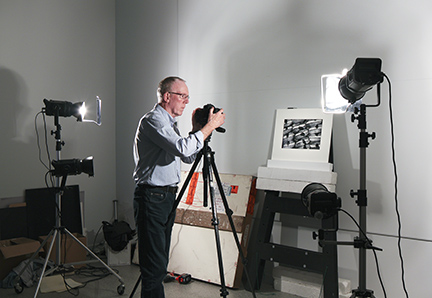 It is possible that no one else has spent as much intimate time with the Sarjeant Collection as photographer Richard Wotton.

He has worked amongst the collection for thirty-one years, documenting the artworks for catalogues, exhibitions, the media, archival records and, more recently, for Explore the Collection, the prize-winning online portal through which the public can digitally access the entire collection. Photographing the nationally significant Sarjeant Collection demands a special touch and an understanding of how to handle some of the country’s most exceptional artworks. “It’s been a real privilege to spend so much hands-on time with thousands of artworks in different media,” he says modestly.

On Wednesday, 1 August, Richard Wotton will close his studio door for the last time, retiring from one of the most dynamic roles at the Sarjeant Gallery – gallery photographer. Wotton leaves the Sarjeant to relax and pursue his own work, and no doubt will be a regular Sarjeant visitor. Staff will farewell him today at a morning tea gathering. Used to a life behind the camera, Wotton’s departure will be a characteristically low-key affair.

During Wotton’s time at the Sarjeant and for the ten years of his artistic association with the gallery prior to that, he has seen an enormous amount of change in photography and has adapted many, if not all, of the technological and digital developments into his work. As with any change there have been negatives and positives. “The biggest change, of course, was the transition from film to digital capture. The ability to see results immediately is something that removes a bit of stress from the job, and gives the reassurance that the subject material has been captured properly. It also facilitates the immediate return of artworks (or people!) to the safety of their proper storage. The downside of digital is too many hours spent staring at a computer screen.”

Wotton’s connection with the Sarjeant Gallery extends beyond the artworks. In 1986, the first Tylee Cottage artist-in-residence was photographer Laurence Aberhart, and he and Wotton shared the Sarjeant Gallery’s basement photographic darkroom for five months. Aberhart and painter Mervyn Williams stand out as inspirational artists for Wotton. “Both are masters of their craft and have an uncompromising approach to their work.” One could say Wotton has adapted that uncompromising approach to his work, demanding and delivering exceptional results for the Gallery.

Jennifer Taylor Moore. now the Gallery’s Curator of Collections, was a student in Whanganui in the early 1990s when Wotton encouraged her art-world ambitions. They have now worked together at the Sarjeant for nearly five years and she points out that Wotton’s quality of work and true artist’s eye have had a very real impact on how the Sarjeant is regarded. “In my opinion, his photographs are second to none. Richard has been instrumental in imbuing the Sarjeant Gallery with a sense of exceptional quality and real class through his impeccable standards as an artist and the sheer continuity of his photographic contribution. We are lucky to have had someone of Richard’s standing at the Sarjeant for so long.”

Wotton has met and photographed many artists but there remains a stand-out. “I’ve met a long parade of interesting people over the years, but the most colourful would have to be Douglas MacDiarmid. A painter, Douglas was born in Taihape in 1922 and has lived in Paris since the early 1950s. I first met him in 1996, when he came to the Sarjeant for the opening of a Whanganui River exhibition which included a suite of twelve works he had painted specifically for that show. Since then we’ve kept up the correspondence, and my wife and I visited him in Paris in 2008.”

A recognised photographer himself, Wotton has exhibited widely in New Zealand and has photographs in the collections of MTG Hawke’s Bay, Te Papa Tongarewa, the Christchurch Art Gallery, Te Manawa and the Sarjeant, which houses eighty Richard Wotton photographs. What’s next for Wotton? “I’m currently working on a new portrait series, photographing people who I consider stand out from the crowd, and there’s also a fairly large-scale documentary project in the wings. Watch this space!”

Wotton recently exhibited an exceptionally beautiful black and white photograph of his granddaughter Amelia in the 2018 Whanganui Arts Review at the beginning of this year. The image displays both an intricate delicacy and an evolving steely strength just below the surface – much like the man himself.

This story was first published in the Wanganui Chronicle on 01 August, 2018