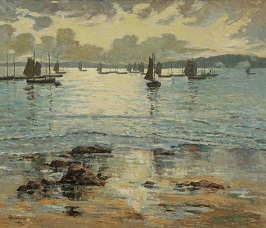 One hundred years ago impressionist painter, Herbert Ivan Babbage (1875-1916) of Whanganui, New Zealand and St Ives, Cornwall was laid to rest in a cemetery in Cardiff, Wales.  The Sarjeant Gallery holds ten of this prolific artist’s works and has mounted an exhibition in his memory. Among the works Bateaux des Pommes, or Apple Barges on the Seine, was one of the Gallery’s foundation paintings, bequeathed to the Gallery before the building in Queen’s Park was completed in 1919.

Jim Norris, recently retired and a hobby artist himself, discovered Mr Babbage in 1999 through a larger exhibition of his works at the Sarjeant, entitled Brushes with Light. Mr Norris has recently published a booklet about the artist to celebrate the centenary of the artist’s death. “I’ve always been a fan of impressionist paintings and Babbage is as good as most of them I think. I couldn’t believe that I had never heard of a painter like that who came from Whanganui so I started taking more notice of him.  As his paintings came up at New Zealand auctions I would take an interest in them and buy them if I could.”

Mr Norris’s extensive research into the life and works of the artist has taken him and his wife Linda around New Zealand, meeting Mr Babbage’s relatives and discovering more of his paintings – watercolours, oil on canvas and card, sketches and sketch books. “When he died in Wales he had a studio of unsold paintings. They were put in a shipping crate sent to St Johns Hill where his parents lived in Whanganui. They sat there for a while then later were distributed around nieces and nephews who have about 25 each. A lot were in drawers, framed and unframed, or hanging on walls. They are very proud of their uncle and his art and would love to be involved if there was a big exhibition.”

Mr Babbage was five years old when his family moved to New Zealand from Australia in 1881 on the Rotomahana. His mother was artistic and took her son into the field drawing and painting. He also received tutoring in art at Wanganui Technical School. The family was keen on the outdoors and he painted widely in the Whanganui region, Mr Norris says. An 1898-1905 sketch book includes paintings of the snow rimmed crater lake of Mt Ruapehu, a sunrise from Mt Taranaki (then Egmont) and many other landscapes.

In 1902 Mr Babbage left Whanganui to attend the London School of Art followed by study at the Academie Julian in Paris. He then set up a studio in St Ives and became part of the artists’ community. Returning to Whanganui in 1909 he had an exhibition of 200 paintings in Whanganui and around the country. He also exhibited and sold well overseas. “He painted all the time, even to the point that on his way back to England after leaving New Zealand in 1911 he saw some icebergs floating around Cape Horn and went out on deck to sketch and paint them.”

War broke out and Mr Babbage, 39, was turned down for overseas service because of his age. He spent the following two years guarding viaducts, which were crucial for transporting munitions to the front.  But on 14 October 1916 he died in a Cardiff hospital from ill health resulting from exposure.

A small selection of Babbage paintings from the collection depicting scenes from New Zealand, France, and St Ives in Cornwall are currently on display at Sarjeant on the Quay until 13th November.  At 5:30pm on Friday 14th October, Jim Norris and Jennifer Taylor Moore, Curator of Collections will pay tribute to this gifted local artist in a Q&A session at the Gallery.  All welcome, free entry