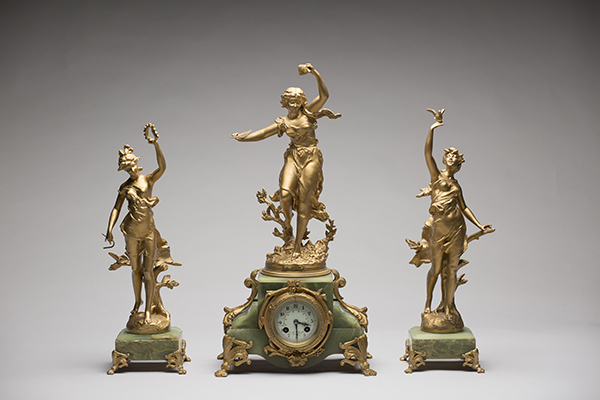 Several of the items currently on display in the Sarjeant Gallery Te Whare o Rehua Whanganui’s exhibition ‘Function & Fancy: Decorative arts from the Collection and Beyond’ have what appears to be gold on their surface.  The gilding on these items is produced using a technique traditionally called ormolu.  These items in the exhibition include the pair of Sèvres Style Vases painted by G. Poitevin and the Ormolu clock with its three figurines.

The word ormolu is derived from the French l’or meaning gold and molu which means mashed or pounded.  In English it is also known as gilt brass, gilt bronze, or fire gilding.  This technique, which was popular in the 18th and 19th Centuries for furniture, jewellery, small statuary, and ceramics, fell out of favour due to the toxicity of the vapours produced and is now very rarely used.
Ormolu involves mixing finely ground high carat gold with a mercury paste which is applied to the brass mount.  The object is then heated in a kiln so that the mercury is vaporized, which leaves behind the gold fused onto the brass.  Inhalation of the resulting toxic mercury vapour can have devastating potentially fatal effects on the nervous, digestive and immune systems, lungs and kidneys. 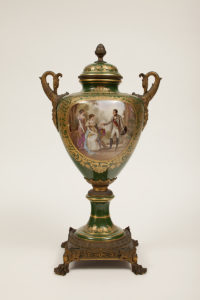 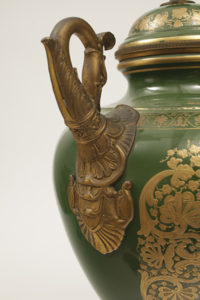 The pair of vases were made in the style of the Sèvres Porcelain Manufactory which was founded in Paris in 1739-1740 and is renowned for its luxury porcelain produced mainly for the royal family, court and aristocracy.  The ormolu elements are on the brass handles, stand, and finial on the lids.  The vases were bought in 1922 by Henry Sarjeant’s widow Ellen and her new husband John Armstrong Neame who made several trips to Europe to purchase works for the fledgling Sarjeant Gallery collection.  The vases cost the Neames 45 pounds and were, in a letter to the town clerk dated 1922, the Neames described them as being “From a collection of treasures belonging to a Russian Grand Duke which was saved and brought to France … These works we had very unusual chances of acquiring, for owing to the immediate need of funds, owners were willing to part with them at very low prices for what, I believe, is known as spot cash.”
The Ormolu clock was made by Ernest Rancoulet who was born in Bordeaux, France, in 1870 and was renowned for producing detailed allegorical bronze figures influenced by both classicism and art nouveau.  The three figurines probably represent music (the ring of bells), writing or knowledge (the scroll and feather quill), and nature (the bird).  The three part clock was given to the Gallery in 1950 as part of a bequest from Miss F.J. Montgomery Moore. The figurines were originally gilded with ormolu however, at some point before they entered the Gallery collection, they were over painted with gold paint to cover the original gilded surface that had probably dulled over time.  We are planning to engage the services of a Conservator to remove the gold paint and restore the clock and figurines back to their original condition.

The exhibition ‘Function & Fancy’ is on until 16 April 2017 at both Sarjeant on the Quay venues: ceramics, silverware and glassware are on display in the gallery space above Whanganui i-SITE while the furniture is displayed at Sarjeant on the Quay, 38 Taupō Quay.