On the Hill: A Century of Depicting the Sarjeant
22324
portfolio_page-template-default,single,single-portfolio_page,postid-22324,bridge-core-3.0.2,qodef-qi--no-touch,qi-addons-for-elementor-1.5.4,qode-page-transition-enabled,ajax_fade,page_not_loaded,,vertical_menu_enabled,side_area_uncovered_from_content,qode-child-theme-ver-1.0.0,qode-theme-ver-28.8,qode-theme-bridge,disabled_footer_top,qode_header_in_grid,wpb-js-composer js-comp-ver-6.9.0,vc_responsive,elementor-default,elementor-kit-27794

On the Hill: A Century of Depicting the Sarjeant 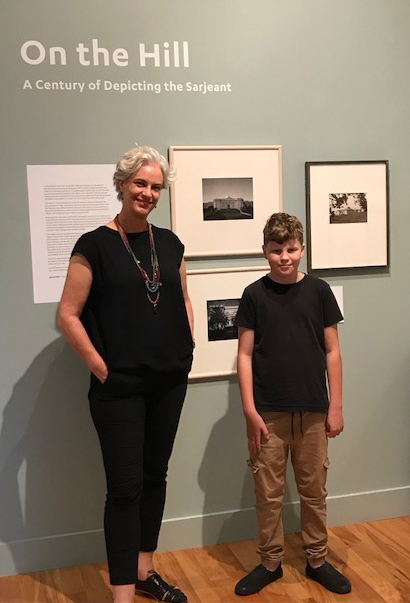 Sarjeant Gallery Relationship Officer Jaki Arthur with Oscar Toy, one of the youngest contributors to the Gallery’s Thousand Stars programme

Whanganui’s star building on the hill, the Sarjeant Gallery Te Whare o Rehua, has attracted many different artistic expressions since its official opening in 1919. An exhibition of artworks, On the Hill: A Century of Depicting the Sarjeant, 2 December  – 25 February 2018, in the temporary premises on 38 Taupō Quay, gives a snapshot of the inspirational role the Gallery’s Neo-Classical architecture, designed by Donald Hosie in 1917, has played in the work of many different artists over the past 99 years.

The interplay between the building and its surroundings has inspired many different approaches, whether the building, at a distance, is framed by trees, photographed by Frank Denton in 1926, a white screen for the projected shadows of foliage by Laurence Aberhardt, first Tylee Cottage artist in residence, 1986, or a mere glimpse through a tangle of bushes in the painting by Craig Collier.

The three dimensional cast aluminium, “replica” model by Matt Pine highlights the cruciform design of the building. The four galleries are arranged in a cross, a style usually reserved for churches.

The show is serendipitously timed as the Gallery celebrates confirmation from Government of a $10 million contribution from the Regional Culture and Heritage Fund towards the $34.9 million redevelopment of the Sarjeant Gallery in Queens Park.

The announcement is also cause to celebrate for the Thousand Stars members who make regular contributions towards the Redevelopment. Oscar Toy, 12, is one of the youngest contributors, donating $5.00 a week for the past two years, and he is now at the $500.00 halfway mark. He has been visiting the Sarjeant from an early age, and, an even closer connection, his parents were married under the central dome.

“I really enjoy art, especially abstract art. I think it’s a very good thing to be giving money to such an important part of Whanganui culture,” Oscar said.

His memories of the Sarjeant as a nine year old are of walking down wide hallways “and it was really big.” He is keen to see the changes that the renovations, earthquake strengthening and new extension will bring. He will be 15   it is completed.

“I’m expecting it to be a lot more modern in its design, and there will be more artworks on show. There is a massive collection.”

In the exhibition Oscar is drawn to Peter Ireland’s wide angle Queen’s Park Panorama – “it’s really big and nice looking. There are ghostly figures painted on top of it and you can see the road that leads up to the Sarjeant.”

He also likes the embossed, abstract work by Rodney Fumpston

“It’s such an iconic building, you can’t but help notice its shape when you see it.”

He is happy to have made the “active decision” on his own to contribute to a building that will be standing proud when he is much older.

“It means somehow I’ve helped recreate an [important] landmark for the city – something that’s recognisable, that’s always been there, [so that] when you think of it you think Whanganui.”

Jaki Arthur, new Relationships Officer at the Sarjeant says she has been amazed and touched by the amount of support for the Redevelopment through the Thousand Stars initiative which allows people to contribute just $5 a week if they choose.

“Seeing the level of rock solid community support via the Thousand Stars program makes me love Whanganui even more. There are so many actively supporting the Gallery by giving regularly and quietly. Now is the time to be a part of the Redevelopment and to watch it happen. The Thousand Stars people will all be recognised in the redeveloped building so it really is a chance to be a part of Whanganui’s history. We hope that more people will sign up”