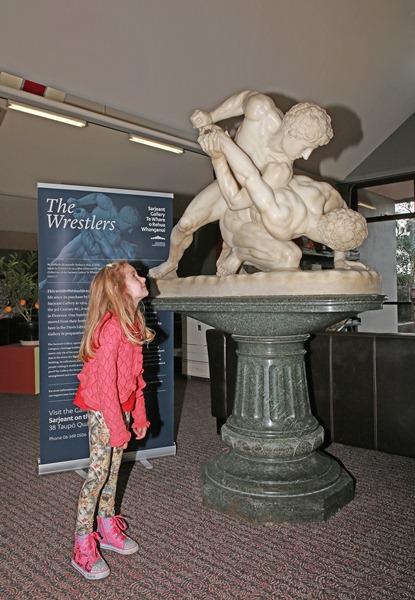 My 1950s childhood world was pretty much bounded by the Whanganui River and Goat Valley, broken only by car journeys up the dreaded Parapara and long summer bach holidays at Foxton Beach. Television hadn’t yet arrived, let alone broadband. The Sarjeant was like a fairy-tale palace and whole idea of Europe and centuries old art was simply incomprehensible.  I plundered the shelves at the city library, then housed in the Alexander building, to find out more.

Later, the story of The Wrestlers’ arrival at the Sarjeant in time for its celebrated opening in 1919 provided a window to the people and culture of early 20th century Whanganui. And in the art capitals of Europe on my late OE, I traced the roots of ancient cultures that gave rise to the artistic ideal from which sprang the original Wrestlers marble sculpture in third century BC Greece.

‘Our’ Wrestlers, a three-quarter sized copy of the Greek original, was purchased from an Italian sculptor’s studio by benefactors of the time who were continuing Henry Sarjeant’s legacy. The move to its temporary home among the library books is only the second time in nearly 100 years that the sculpture has left the Sarjeant Gallery and the plan is for it to remain at the library until the earthquake strengthening and extension project is complete.

Meanwhile Sarjeant on the Quay, with its fantastic current exhibitions, is doing a great job of helping keep Whanganui’s reputation as a centre for art alive during the Sarjeant redevelopment project, while providing our youngsters with their first early art encounters and safely housing the nationally significant collection.

But I want future generations to be able to take their first tentative steps into the world of art, artists and their history in an architecturally stunning gallery that they can be proud of. It will be known nationally and internationally and will provide a safe home for the treasures of the Sarjeant collection including, of course, the awesome Wrestlers.