In the Lion’s Den
16281
portfolio_page-template-default,single,single-portfolio_page,postid-16281,bridge-core-3.0.2,qodef-qi--no-touch,qi-addons-for-elementor-1.5.4,qode-page-transition-enabled,ajax_fade,page_not_loaded,,vertical_menu_enabled,side_area_uncovered_from_content,qode-child-theme-ver-1.0.0,qode-theme-ver-28.8,qode-theme-bridge,disabled_footer_top,qode_header_in_grid,wpb-js-composer js-comp-ver-6.9.0,vc_responsive,elementor-default,elementor-kit-27794

In the Lion’s Den 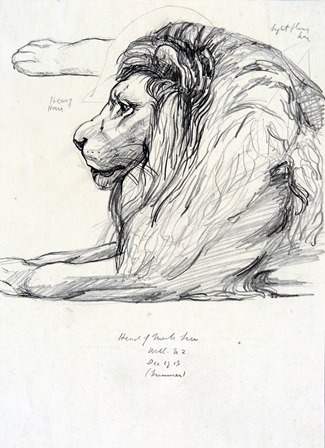 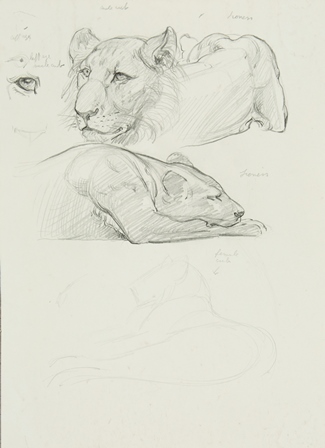 In the Lion’s Den

Some works of art capture your interest and invite you to return to them again and again. One group of works from the collection of the Sarjeant Gallery Te Whare o Rehua Whanganui that have continued to fascinate me since I first came across them is a folio of drawings made by Vivian Smith (1883-1946) at Wellington Zoo between 1913 and 1917. While these drawings represent many different animals and birds, it is the lions that appear to have especially captured the artist’s imagination, appearing on 25 pages throughout the collection. This is perhaps fitting, given the special place that the lions hold in the history of Wellington Zoo. 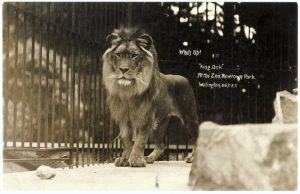 Located in Newtown Park, Wellington Zoo was established by the Wellington Zoological Society in collaboration with the Wellington City Council in 1906. While a desire to help conserve native fauna and provide an educational resource lay behind calls for the development of such an organisation, a major catalyst for its realisation was a young lion by the name of ‘King Dick’. Named for Prime Minister Richard Seddon, the lion was offered to the city in April that year by Captain Frank Taylor, the managing director of Bostock and Wombwell’s Circus and Menagerie. The offer was quickly accepted and the young lion was installed in a purpose-built cage near the pond in Newtown Park on 4 June. 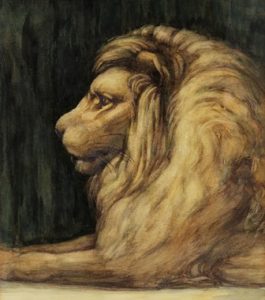 While new enclosures began to appear around him, visitors to the zoo watched as the lion grew from a gangly one year old to a full-grown adult. In 1909 Dick was relocated to a more commodious den and introduced to his new consort – a lioness provided on loan by Wirth’s Circus and Zoo. The pairing, however, was not a good match and in January 1912 the lioness was returned in exchange for another. The new ‘Queen’ – or Mary as she became known – settled in well, resulting in the birth of two cubs, George and Maud, on 16 February 1913. The new family proved popular with public and funds were quickly secured to purchase the lioness so that she and her offspring could remain at the zoo. This joyful occasion was dampened slightly in the months that followed as George’s health began to deteriorate, with the young cub later dying of pneumonia in June 1914.

Despite this tragedy, the family continued to grow in the years that followed. The first addition came in early 1915 when a young male called Briton was bought in on loan from a zoo at Onehunga as a mate for Maud. The young lioness subsequently gave birth to four cubs in October that year. Of these, one male cub (called George after his late uncle) and one female remained at Wellington Zoo, helping to draw more attention to the lion cages.

It was as this story was playing out in the zoo’s lion enclosure that Vivian Smith put pencil to paper, capturing the likeness of King Dick and his young family. Born in Sheffield in 1883, Vivian immigrated to New Zealand in 1913 to take up a teaching position at Wellington Technical College. During his early years in Wellington he returned to the lion’s den multiple times, making a range of quick sketches and tonal drawings. One of the most striking images that he produced is a study of King Dick in profile. The artist himself must have considered this drawing a success, reusing the sketch to produce both a watercolour and an etching. These works are held in the Sarjeant collection alongside the folio.
As for the lion that started it all, King Dick remained at Wellington Zoo until December 1920 when, after a period of ill health, he was put down. His skin was subsequently taxidermied and installed as an exhibit at the Newtown Museum. His remains currently form part of the collection of Te Papa Tongarewa Museum of New Zealand.