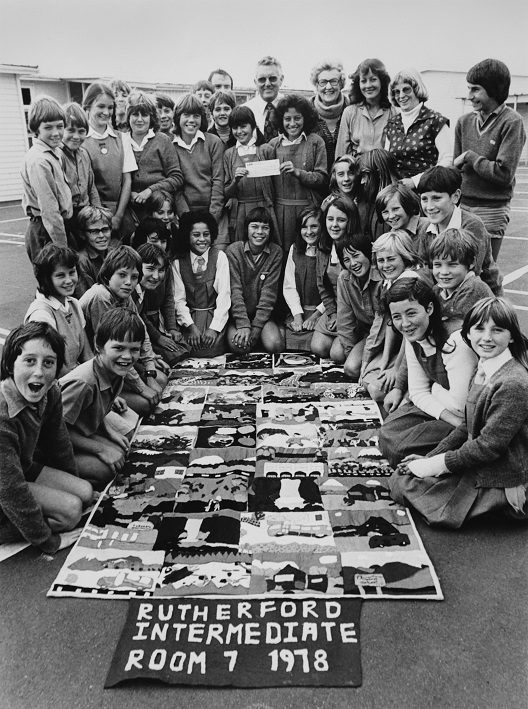 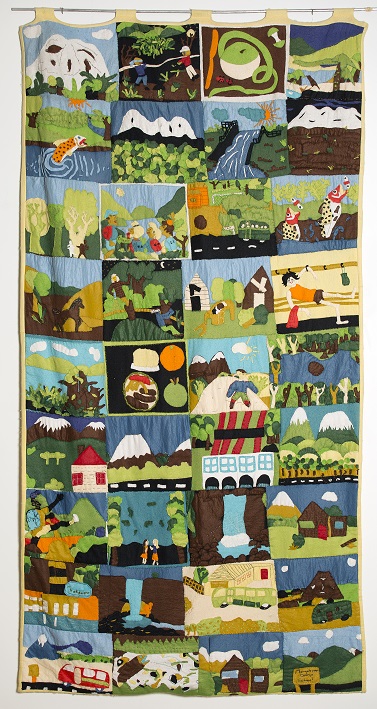 “I remember that!” The enthusiasm is palpable as two Whanganui educators (Dawn Duncum and Rei Hendry) and a former pupil of Rutherford Intermediate School (Jennifer Taylor Moore, Curator of Collections, Sarjeant Gallery Te Whare o Rehua Whanganui) reminisce over a joyous felt work that hangs in the Gallery’s latest exhibition Revealed: Collection discoveries from our recent move on display until 18th September.  Colourful trout leap after flies, snow-capped mountains (Tongariro and Ngauruhoe) pierce blue skies; kids ride in buses, tramp through bush and volcanic terrain; someone collapses smiling, exhausted on a bench. A class of 36 children made the felt wall hanging in 1978 after visiting Mangatepopo Camp in Tongariro National Park.

When Bill Milbank, then director of the Sarjeant Gallery, bought it in 1979 the wall hanging was the first work by children acquired by the Gallery and it hung for many years on a wall, just through the glass doors.  Mrs Duncum (nee Kitney) the class teacher in 1978, and Mrs Hendry, a former art and craft adviser, were colleagues and part of a “related arts” pilot programme that ran for three years at Rutherford Intermediate School and in several other areas of New Zealand.  “Bill came out and saw it. He said it’s absolutely wonderful. The Sarjeant’s got nothing made by children, we should have children’s art,” Mrs Duncum recalls. He was also very supportive of the programme.”

She remembers Mr Milbank sitting on the floor with the children – he had youngsters himself at the time. “He was very much part of it and when he saw it finished it just blew him away. He said it’s a real work of art and the kids were all beaming. He rang me later and said – we are going to buy it for a whole $100.00.”  Ms Taylor Moore said gallery staff also admired the children’s work. “Bringing it out now and putting it on display staff are saying – it’s actually very good! And they are all looking at each of the pictures and commenting on the quality of it.”

A recent Wanganui Chronicle article about the exhibition mentioned the wall hanging, which prompted a former pupil’s mother to bring in a newspaper photograph of the children and teachers with the felt work. The photograph is included in the catalogue of the show, and it triggers memories of children and their families and of a time when art in schools was more experimental. The brief by the Minister of Education was to bring the arts alive in schools.  “When we were working on this it was the 1961 syllabus which said – “go out and be creative!” Go and write poems, dig a hole, find some clay and make pots; do screen-printing,” Mrs Hendry said. “They had all these art advisers [such as Cliff Whiting] across New Zealand spread out across the country. We are historical creatures, like dinosaurs.”   The approach was similar to that of enquiry learning today said Mrs Duncum. “Children investigated an idea in any way they liked; some did lots of writing, others did lots of making.”  One time they turned the classroom into an Australian desert and built a cave, which they painted with Aboriginal designs. Another time they made a town and researched how towns are built.  “A person from the District Council talked about town planning so when the kids built it they incorporated what they learned.”

Lots of planning, organising and sourcing of materials was involved and the projects were intensely absorbing, as children, teachers and advisers worked solidly every day for weeks – researching, designing, calculating, making, writing – utilizing skills and gaining knowledge across many different areas of the school curriculum.  Mrs Duncum, who now teaches at Whanganui Intermediate School, has always been interested in doing things a little bit differently and she thinks this approach “fits beautifully with the whole modern learning concept and with the big [open plan] rooms.”

So if you were a pupil at Rutherford Intermediate School in 1978 or remember working on one of these projects the Sarjeant Gallery would love to hear your memories.