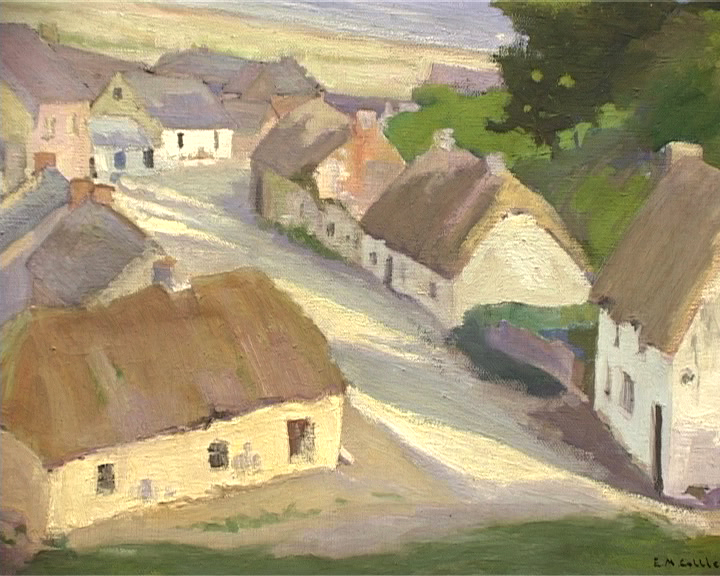 Edith Collier was born in Whanganui in 1885 and died there in 1964. Apart from nine years in the UK from 1913 – 1921, the rest of her life was spent in her hometown. This exhibition brings together works that Collier made in response to three coastal communities: Bonmahon, Ireland; St Ives, Cornwall, England; and Kawhia, New Zealand. It was in these locations that Collier was at her most productive and these works are some of the most memorable of her oeuvre. Unusually at the time of her death there was almost no reflection of the place where she spent most of her life – Whanganui, despite it being another ‘coastal community’. The small selection of works that were produced of the region featured the rural landscapes of various family farms: near Marton, up the Waitotara Valley, and the back country north of Taihape.

Collier’s artistic training began while a student at the Wanganui Technical College in 1903, where she studied under Denis Seaward. Further encouragement came from Herbert Ivan Babbage, a neighbour of the Collier family, who encouraged the artist to continue her training overseas as he had for twenty years in the UK. In 1912, at the age of 27, Edith Collier joined a number of enthusiastic New Zealand artists of the time and left for England to become an expatriate.

The decision was to have a great impact on the subsequent development of her artistic career. First at St John’s Wood Art School in London, then onto Bonmahon, Southern Ireland; Bibury in the Cotswalds and St Ives, Cornwall where Collier was to experience the freedom and experimentation that artist colonies in these areas provided. Influential teaching and friendship were provided through Margaret Macpherson and Frances Hodgkins. What resulted was a relatively brief period of rapid development of style, subject matter, colour and form. By viewing works produced in each of these coastal communities we can see the evolution of Collier as an artist and realise the important place she occupies in New Zealand’s relatively short art history.