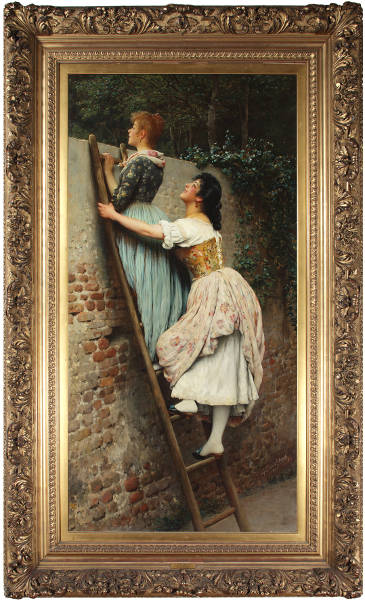 This small exhibition is drawn from the Sarjeant Gallery Te Whare o Rehua’s permanent collection and takes its title from one of the Gallery’s most beloved works Curiosity by Eugen von Blaas, an Italian painter working in the style known as academic classicism. As viewers we’re encouraged to consider what might these young ladies being peering at over the wall, what can they see that we can’t?

Like Curiosity the rest of the works in this exhibition all have an element of intrigue. Centre stage in the exhibition is Bill Hammond’s painting Living Large from 1995, one of a series of paintings that reference the legacy of Sir Walter Lawry Buller (1838-1906), a Victorian orthinologist who was responsible for the killing and trading of thousand of native New Zealand birds. This painting comes from a significant period in Hammond’s practice that began in 1993 after the artist spent time in the sub-Antarctic Auckland Islands south of Bluff, particularly Enderby Island. The island was once used as a whaling station and Hammond described it as a ‘birdland’, a haven free from predators. He commented in 1996 to the art historian Gregory O’Brien “You feel like a time traveller, as if you have just stumbled upon it – primeval forests, ratas like Walt Disney would make. It’s a beautiful place, but it’s also full of ghosts, shipwrecks, death”.[1] Living Large depicts a slightly terrifying landscape where the furniture is at sea and birds watch and wait for someone.

Alongside Living Large is a work attributed to Gaspard Dughet 1615-1675, (France/Italy) the untitled scene of men fishing in a landscape could be real or imagined but with nearly four centuries between when it was painted and now, its origins and subject matter are nearly as cryptic as the Hammond.

Two collages by Peter Madden are portraits but on closer inspection each of the faces depict an interior world, another place and another time. Julian Hooper’s spindly drawing of an aeroplane, crashed across the page of a diary was painted during his time as artist-in-residence at Tylee Cottage in 1998. Like Hammond, Emily Valentine morphs birds into a whole new realm with her Kingfisher Squadron waiting in formation on the gallery wall, poised for flight.