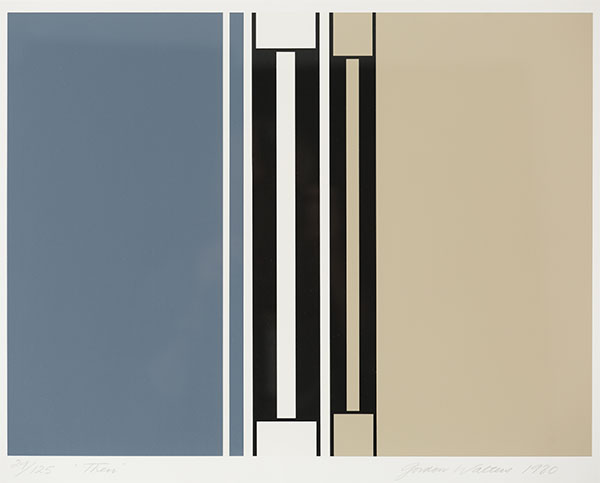 Gordon Frederick Walters (1919 – 1995) was a New Zealand painter and printmaker well-known for his artworks of interconnecting and intersecting forms based on the koru. The rich visual vocabulary he developed and worked with throughout his career emerged from his unique perspective as a pioneering abstract and modernist artist working in New Zealand. This exhibition comprises of a selection of his works on paper from the Sarjeant Gallery collection.

Walters grew up in Wellington and did not receive any formal art training until he left school to work as a trainee commercial artist and enrolled in evening art classes at Wellington Technical College. English artist Roland Hipkins was one of his teachers and encouraged Walters to focus his interest on the environment around him.

In 1941 Walters became friends with Theo Schoon, a Dutch artist who had experienced European modernism at first hand, which interested Walters greatly. Walters accompanied Schoon on trips to South Canterbury in 1946-1947 where they worked together to record the Māori rock art on the limestone bluffs there. These early recording trips had a significant influence on the development of Walters’ visual vocabulary, establishing forms that he drew from repeatedly throughout his career.   In the screenprint Then, dated 1980, are attenuated rectangles abstracted from the silhouetted rock art figures he had studied.

Walters travelled to Sydney, London and Europe in 1947 – 1953 and had the opportunity to view examples of European modernist abstraction in person for the first time. This had a profound effect on him and he considered the time he spent in Paris in 1950 “…was really the starting point for my commitment to abstract painting…” (Interview with Ray Thorburn, 1982)

When Walters returned to New Zealand in 1953 he began experimenting with the koru, developing a geometric form which he would continue to explore for the rest of his life. He created a dynamic visual language of interlocking and interconnected forms. These positive and negative forms generate a visual interplay that both intrigues and challenges the viewer. Examples of this motif in the exhibition include Koru, an early gouache on paper dated 1968, and Arahura, a screenprint dated 1982.

Following Walters’ seminal exhibition at the New Vision Gallery in 1966 he became established as a pivotal figure in New Zealand art history. His work, particularly ones based on the koru form, initiated an ongoing dialogue about the appropriation of traditional forms by non-indigenous artists. His formal approach, rich imagery, and impact on emerging and contemporary artists firmly places him as a leader in the development of New Zealand abstraction.