Posted at 12:38h in Media Releases by xuyi
6 Likes
Share

The Tylee Cottage Residency celebrates 30 years this year. Catharina van Bohemen talks to some of the alumni. Andrew Drummond, an early resident, described the experience as ‘an electrical bolt which generated energy for the next five years’.

The Tylee Cottage Artist-in-residence programme, established in Whanganui in 1986, is funded by the Whanganui District Council and managed by the Sarjeant Gallery. It provides a house and studio for an artist to pursue a “relevant aspect of work” over two to twelve months. For thirty years it has been a crucible for some of this country’s most significant artists – Anne Noble, Joanna Langford, Richard Orjis, Laurence Aberhart to name but a few – whose work has greatly enriched the Sarjeant Gallery’s collection and the country’s taonga. The first Tylee artist was Laurence 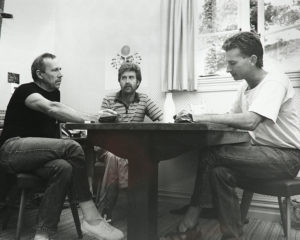 Aberhart in 1986 – an appropriate choice because soon after the gallery opened, a local photographer, Frank Denton, was asked to build a collection of international photography. From its inception, thus, the Sarjeant Gallery has always supported photography, and many Tylee residents have been photographers.

The Tylee artist is expected to interact with the Whanganui community, and to produce work which has some connection with the Whanganui region. In turn, the Gallery benefits from its relationship with the artist and, where appropriate, mounts an exhibition after the residency has ended. Before the residency’s establishment its only artistic equivalent was the year- long Frances Hodgkins fellowship at Otago University, considered by some artists to be too long for their particular commitments: part of Tylee’s appeal is its flexible, thus concentrated, time options.

The three artists I spoke to all praised the way their needs, both artistic and material, were respected. Christchurch sculptor Andrew Drummond (1987) called Bill Milbank “an amazing director who completely allowed an artist’s discursive practice.” Because of the size of his work, studios were not initially available, but Andrew said Bill was “good at getting space, and commandeered a liquor warehouse, an old plastics workshop, and outside space, anywhere I could make what I needed.” 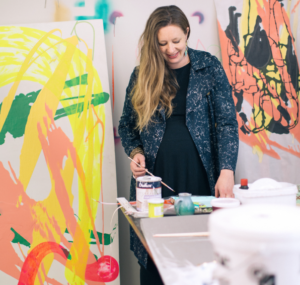 Miranda Parkes (2009) also from Christchurch, paints exuberant abstract works, often striped and gridded, that seem to burst or sag out of their frames. She was in a “transitional” stage when she arrived. “I wanted to broaden my practice away from scrunched canvases, which is what I was doing then.” She particularly liked the cottage’s intimate studio space: “just a bedroom [where] I could let the work talk to me. I work responsively to conditions – I was making small works then which were precursors to what I ended up having in the show.”

This show had to wait for three years. The Christchurch earthquakes intervened after she left Whanganui and her studio was red-stickered and then demolished. 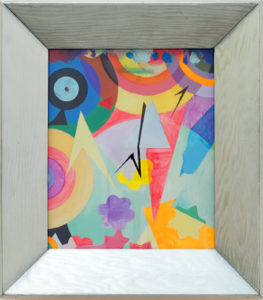 As if this were not enough, in 2012 the Sarjeant Gallery itself was assessed as earthquake-prone.

It did, however, host her post-residency exhibition mischievously entitled Shebang, before it closed. In his introduction to Shebang, director Greg Donson suggests that the time-lapse allowed Parkes to move from experimentation to develop her canvases further.Miranda Parkes in her Christchurch studio. Photo: Chrissy Irvine. “Rather than pushing the grid and the stripe out into the space we occupy, the gallery, she’s pulling them back into the painting, turning her practice outside in.’ 1

Ann Shelton (2012/13) who has held many residencies, is also in the unusual position of administering one: Te Whare Hēra Wellington International Artist Residency, a collaboration between Massey University (where she is Associate Professor of Photography and lectures in Fine Art and Photography) and the Wellington City Council which invites international artists to work and exhibit in the city. She emphasised the importance of “taking the temperature” to understand an artist’s expectations, and particularly acknowledged the support and interest she received from the curatorial staff at the Sarjeant as she prepared for her exhibition The City of Gold and Lead. She also affirmed the primacy of solitude: “I was shown around and given a lot of contacts for my initial research ideas, but you also want to be left on your own.” 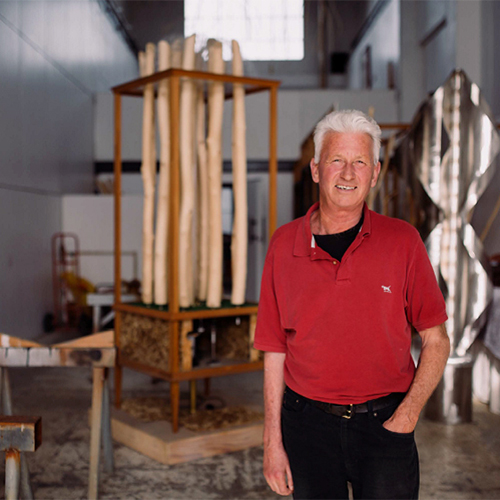 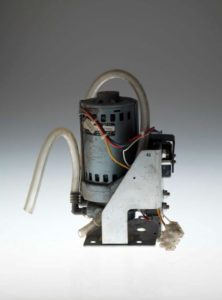 Andrew Drummond agrees. “A residency is a place to work, but the most important place is your own headspace.”  His year was “prolific.” “I completed work I’d begun before at Otago – the Braided River work which included drawings and objects, 5 SITES work in Govett Brewster, the Containers and Vessels project, as well as an installation in the dome of the Sarjeant. My last work was Woodcutter’s Window, a series of woodcuts I made in response to the local land’s being chopped up for agricultural use.“

These two artists have always been concerned with place. Drummond’s work is monumental kinetic sculpture, which in its variety and absorption with time (it often rotates) relates to his fundamental concern: the mutually transformative possibilities of man’s place within the landscape. In a 2010 interview with John Finlay he says that his more recent sculpture responds to cyclical principles by using the “fickleness of the wind” to demonstrate the “quirkiness of machines” compared with human sensory perception. “My machines do not just do what they do; they also inform us about the environment and play on the idea of the transformative moment.” 2

Ann Shelton’s large-scale, hyper-real photography examines place in relation to trauma, anxiety and failure. She borrows academic Ulrich Baer’s phrase “spectral evidence” as a way of linking the bombing of the Whanganui computer by the ill-fated, callously labelled “cheerful punk” Neil Roberts, whose words “we have maintained a silence closely resembling stupidity” she links with the excision from local history of Charles Mackay, the mayor who opened the Sarjeant Gallery in 1917. He expressed the wish that it be “a temple dedicated to the arts of peace.” Mackay later shot poet Darcy Cresswell, who had threatened to reveal his homosexuality if he didn’t resign as mayor. Cresswell survived; Mackay was imprisoned and his name removed from the Gallery’s foundation stone (and a street). The City of Gold and Lead unites these events, and she asks us to consider their contemporary application – Wiki- leaks, Edward Snowden, global gender rights.

These three artists all agreed that residencies greatly benefit their work. Miranda Parkes said they were like “seeds.” She felt that the Tylee residency gave her recognition: “I was there because I was an artist.” She was also proud of being plaited into an artistic tradition and she loved her involvement in an artistic community. “It’s a cool residency.”

Ann Shelton said residencies encourage productivity “because they give you space.” Her photographs of the detritus of the Whanganui computer, Neil Roberts’ words, and her reinstating in gold leaf of Mackay’s name on the Gallery foundation stone shows how an artist’s work may penetrate evasion and erasure, may remind us that if history is the story told by the victors, there are always other stories. “I am offering new or revised points to examine …history that has been and continues to be manipulated and contrived in various ways,” she told Sarjeant curator Sarah McClintock.3

The second Tylee artist and the most senior, Andrew Drummond, should perhaps have the last word. “When I think of my time at the Tylee Cottage, I think continuity – it was like a electrical bolt which generated energy for the next five years – that’s what residencies do – they drive you forward.”