Classical guitarist Cristián Huenuqueo to play at the Sarjeant

27 Jun Classical guitarist Cristián Huenuqueo to play at the Sarjeant 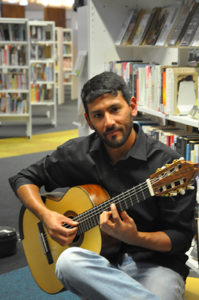 Chilean-born classical guitarist Cristián Huenuqueo will present a concert featuring the music of Latin American composers at the Sarjeant Gallery on Sunday.

He will play music by Agustín Barrios (Paraguay), Juan A. Sánchez (Chile) and Antonio Lauro (Venezuela) Also included will be Spanish music of the 19th and 20th century, creating an entertaining mix of rhythms and melodies.

Based in New Zealand since 2010, Huenuqueo has an Honours Degree in Classical Guitar obtained at the Pontifical Catholic University of Chile and a Postgraduate Diploma in Music Performance from the New Zealand School of Music, Wellington. Over the years, he has taught classical guitar and music theory and at the same time has developed his musical career performing as a soloist as part of ensembles. His performances have covered several venues in New Zealand such as St Pauls Cathedral, the Adam Concert Room, Futuna Chapel, Te Manawa and The Regent on Broadway among others.

During his career, Huenuqueo has participated in different courses, concerts, master classes, seminars and competitions in various countries around the world with well-known guitarists. When he was in Chile he was an active member of the Ensemble of Guitar Chile and when he moved to New Zealand Huenuqueo was part of the Guitar Ensemble of New Zealand throughout 2010 with Matthew Marshall as conductor.

In the last couple of years, Huenuqueo has been teaching classical guitar in the Manawatu area and performing chamber music around New Zealand. His work covers schools, ensemble coaching, private lesson and concerts. In 2018 Huenuqueo became the president of the Classical Guitar Society of Palmerston North, which provides a place for people of all ages to enjoy playing the classical guitar.

This article first appeared in the Wanganui Chronicle on 24 June, 2018