A glut of gorgeousness at gallery
20583
post-template-default,single,single-post,postid-20583,single-format-standard,bridge-core-3.0.2,qodef-qi--no-touch,qi-addons-for-elementor-1.5.4,qode-page-transition-enabled,ajax_fade,page_not_loaded,,vertical_menu_enabled,side_area_uncovered_from_content,qode-child-theme-ver-1.0.0,qode-theme-ver-28.8,qode-theme-bridge,disabled_footer_top,qode_header_in_grid,wpb-js-composer js-comp-ver-6.9.0,vc_responsive,elementor-default,elementor-kit-27794

A glut of gorgeousness at gallery

28 Oct A glut of gorgeousness at gallery

Posted at 14:29h in Media Releases by xuyi
4 Likes
Share

JOAN. Can there be such a thing as a glut of gorgeousness?

I find that to be the only way to describe the present exhibitions at the Sarjeant Gallery. Everywhere you turn you are offered a feast for your eyes. I honestly could have spent a whole morning moving around this veritable feast. Mike has chosen one exhibition to write about this week. I have a heart and mind full of treasures seen and would like to go back this week to revisit most of them. Add to that, the poignancy of the Frances Stachl exhibition across the road and the photos of many people we know, superbly captured by Richard Wotton and I am ‘glutted’.
I encourage you to go along and see these fine examples of what the Sarjeant Collection contains. It would be hard not to agree that the move to the Quay and better storage, the cataloguing and rediscovery of many works has been so very worthwhile. What joy for the curators. Maybe, too, the other staff could curate their choices next year from the vast, mainly unseen collection?
My other plea to you is to remember this coming Sunday’s concert at the Concert Chamber. James Benjamin Rodgers’ biography shows us a singer of present success and future greatness. He was a delight to listen to in Sweeney Todd, presented by the New Zealand Opera Company and, now living in New York, we shall not have many opportunities to hear him.
I glimpsed the elegant Donald Trott in the city last week. Too shy to rush over to him, I just needed to comment on how lovely it is to have him back in Whanganui. I hope plans are ahead for next year’s Opera Week! Whanganui was buzzing last Saturday at the start of the holiday weekend. I was at the Sarjeant Gallery again, this time to listen to three well-known photographers, who had travelled from Auckland and Wellington to talk about their work at present hanging in the gallery.
It is always both interesting and helpful to meet the creators of art that you are examining and I enjoyed listening to all three. Lucien Rizos is a violinist with the New Zealand Symphony Orchestra and photography is his other passion. Peter Black remains a commercial photographer but has developed his exhibition work over the years. Mary MacPherson, his partner, is both an acknowledged poet and photographer. I will comment further on these gifted artists next week. I do, however, need to say how pleasing it was, as we toured the exhibition, See What I Can See, which continues until November 6, to observe how many visitors came into the Gallery over that short hour. So heartening. 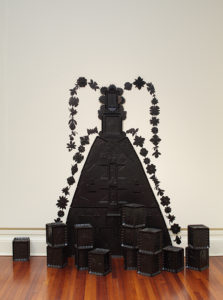 MIKE. An exhibition revelling in the return of spring, Bloom, presents a fascinating selection of works from the Sarjeant’s collection, curated by Jennifer Taylor Moore. So many different styles, so many different periods are found here. Works from an earlier generation include an oil on canvas, Miniature Painting, by Alfred Hayward, and an attractive Edith Collier offering. More recent items are Rodney Fumpston’s flaming pink Hibiscus; Flowers on the Wall, a screenprint on paper, by Bob Negryn, a Dutch artist; a strange and somewhat unsettling photograph in black and white by Fiona Partington, For the Price of Lilies: a portrait of Joseph Makea 1985; Lynn Hurst’s lambda print, Dead Hydrangea and Bunny. It was a surprise and a real pleasure to see Sea Rose, by the late Joanna Paul, particularly as there were photographs of her in the other exhibition, See What I Can See. It reminded me again of the evening I spent at Joanna’s, many years ago, in the company of a few of her friends. Wanting inspiration for new works, they had settled on the delicious poems by Sappho, a lady born on the Greek island of Lesbos c. 600 BC. Existing translations were not what Joanna wanted, so I was called upon to produce up-to-date versions. A delightful symposium.
The curator’s introductory notes to Bloom mention the occurrence of flowers in art as far back as the frescoes in Pompeii. Andrea Gardner’s striking work reminds us of statuettes dating back to 1500 years before that, on the island of Crete. Her Rosette, an imposing, starkly outlined black figure, is, however, constructed from recycled meat trays! It was the shape of her creation which drew me in. The large work represents a goddess of Minoan Crete, worshipped at a time around 2000 to 1400 BC. Indeed, well before anything was known about Classical Greece, the Minoan civilisation flourished on this relatively small Mediterranean island, approximately 160 miles long and only 35 miles across at its widest point. Many cities existed there, the most famous being Knossos, which was ruled, according to legend, by King Minos. The city is mentioned in the poetry of Homer, whose works are generally dated to the eighth century BC, yet there was no physical evidence of its existence for almost three millennia, until its palace was excavated by Sir Arthur Evans, early in the 20th century. Evans had cause to believe that the skill of writing had been known on Crete, a long time before it was discovered elsewhere! Because of a seal stone (like a signet ring) Evans had been given, he followed a hunch and bought land in the area. There be began to excavate. The result was his discovery of the palace of Knossos and a civilisation rich in art and architecture. Frescoes of acrobats leaping over bulls, Minoan script, pottery, jewellery, Theseus and the Minotaur – all are aspects of this stunning archaeological find.
The Minoan goddess? Many artefacts found at Knossos have emphasised the importance of religion and its accompanying festivals to the inhabitants of Crete. Rings, brooches and statuettes have been unearthed , bearing the image of the Snake Goddess, who wears a high crown, is bare-breasted and has three snakes twining round her body. She was the nature goddess, her breasts representing fertility and the snakes being a symbol of family protection , as guardians of the household. Along with her priestesses, the goddess played a major role in the daily life of this advanced civilisation. My thanks to Andrea for reminding me so strongly of a story that I last taught to students about 25 years ago! My memory required some re-reading of texts long forgotten and I know that I shall wish to read further.
JOAN. No offers or ideas yet concerning a possible musical concert out at the Bason Reserve! Still hoping! mjstreet@ xtra.co.nz