Women of Whanganui captured in Julia Holden’s Her Indoors exhibition

By Liz Wylie, Reporter for the Whanganui Chronicle. 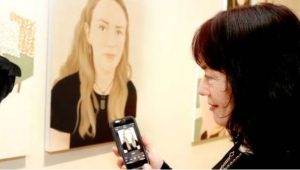 Artist Julia Holden uses the mobile app to hear the audio for her portrait of Marianne Arthur. Photo /Bevan Conley

Her Indoors is an exhibition of oil portraits by Julia Holden, showing at Sarjeant on the Quay.

Holden was the resident artist at Tylee Cottage from last December until February this year and the portraits are of women (and a couple of dogs) who visited her there.

Sarjeant Gallery visitors who recognise the more than 40 subjects in Holden’s paintings will see that she has captured not only their likenesses but something of their intrinsic natures.

“I wanted to make them not too prescriptive so that they were comfortably themselves.”

Holden said the exhibition is a suite of paintings that combine to form a singular collective portrait where the subjects were all in the same setting, and she has included a painting of the exterior of Tylee Cottage.

The subjects are all female (apart from Riah-King Wall’s dog Reynolds) because the exhibition is about Women’s Suffrage.

“I received funding from the Creative New Zealand Suffrage 125 fund to extend the work I did during my residency last year.”

Her aim was to create a series of experimental visual portraits exploring the intersections between women’s roles and the legacy of suffrage in New Zealand.

It is a continuation of the work Holden completed in Whanganui last year when she recreated paintings, photographs and sculptural works from the Sarjeant Gallery’s 125: Celebrating Women from the Collection exhibition onto living canvasses.

Using a group of human volunteers as her canvasses, Holden paid homage to the original artists by painting her interpretations of their works onto the faces of her models and used clay to replicate the hairstyles.

Some of the performance painting sessions were live-streamed and the results were photographed and exhibited alongside the original works with the names of the models.

The models for Her Indoors are Whanganui artists, Sarjeant Gallery staff members and friends from out of town who visited during her residency. 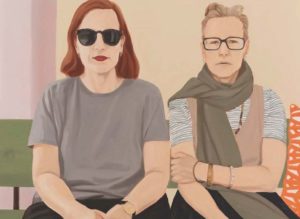 Some of the portraits are pairings of friends, mothers and daughters, and artist Lauren Lysaght shares her portrait with her little black pug named Joan.

Sarjeant Gallery assistant curator Jessica Kidd and artist Roberta Thornley were both pregnant when photographed for their portraits.

“They have both since had daughters so there were a couple of nascent females in those paintings as well,” said Holden.

Although her paintings are on static canvasses this time round, Holden has added another dimension with audio.

Gallery visitors will be able to use their mobile devices to access voice recordings for each portrait.

“I asked the subjects to talk about what suffrage means to them and recorded their voices.

“Visitors to the exhibition will also be able to record their own thoughts if they wish.”

She hopes that visitors will make themselves comfortable on the Tylee Cottage sofa which has been installed at the gallery and lift a telephone receiver to enable them to record their own suffrage stories.

“They may wish to share a story of their own, talk about a mother, grandmother, aunt or a woman they admire.

“That audio will be added to the record after the exhibition for posterity.”

September 19, 2019, marked the 126th anniversary of New Zealand women becoming the first in the world to win the right to vote.

Holden said it is important to remind ourselves of the significance of the enfranchisement.

“I know that I tend to take that right for granted and when you think about, it’s not so long ago that women could not do that.”