Posted at 17:12h in Media Releases by Officer
11 Likes
Share

By Paul Brooks, Editor of the Whanganui Midweek. 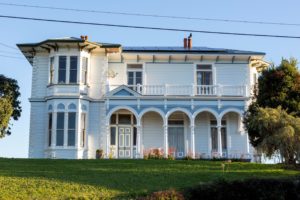 Sarjeant House at 47 Bell St. Got any pictures?

Dave and Marina Moore of Villa Services are restoring their home to its former glory.
No 47 Bell St, otherwise known as Sarjeant House, was built for Henry Sarjeant and his wife Ellen Agnes, nee Stewart, the eldest daughter of surveyor John Tiffin Stewart. Built in the late 1890s, it was modelled on a sketch of a house at Lake Como, Italy. She had seen the impressive building during their honeymoon, a two-year trip around the world.

Dave says the heritage features of the house are intact, but he is hoping there are photographs somewhere of the original period furnishings. Once restored to its historical integrity, he hopes to be able to open the house to visitors during the opening of the Sarjeant Gallery, Henry Sarjeant’s legacy.
“I’m thinking there might be some value in having the house, especially downstairs, with some art and furniture as it might have been.”

Apart from that documented in the Heritage Inventory, there is not a lot known about the history of Sarjeant House and there are practically no known photos of the interior in its heyday. Unless, of course, they are hidden in private collections.
“We love the villa and want to take it a step back to what it might have been like during the Sarjeant era. We’re trying to restore it authentically.”

Dave says he imagines the place must have once housed an impressive art collection.
“If we could get some interest from the public — maybe from their grandparents’ or great-grandparents’ archives, pictures of them in the house. Even a picture of two people standing in front of the stairs would probably show what was in the alcove to the right of the staircase.”
Dave says the alcoves, expensive to make, were usually there to show off a piece of art and the owners’ taste.

“The other thing I’m really interested in is finding out which villa in Lake Como it was that Ellen drew, because we can’t find the drawing, the sketch she did or had done.
“This place is special, because there are very few Italianate style villas left in this sort of entirety.”

If anyone knows anything or can lay their hands on some photographs of the interior of Sarjeant House in its early days, please contact Dave on 021 412 600.