Sarjeant Redevelopment: Finds of Whanganui’s past at Pukenamu Queen’s Park 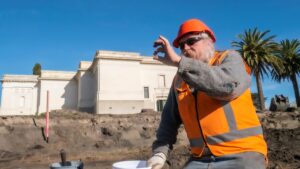 An unusual bead is just one of the artifacts unearthed in the Sarjeant Gallery Te Whare o Rehua redevelopment.

Archaeologist Michael Taylor has been monitoring the digger’s scraping back of the top layers in preparation for the construction of the new wing – Pataka o Sir Te Atawhai Archie John Taiaroa. He says sieving to find what’s in the soil – an animal tooth, bits of a gin bottle and plates, a cannon ball and 120-150 year-old children’s marbles – all pieces together to form a picture of people’s lives.

The Gallery site on Pukenamu Queen’s Park was occupied by the British military from about 1847 to 1870 with 200 men stationed there, some with their wives and children. “The diggers look like massive machines but they’re actually quite sensitive and the drivers can operate them in a sensitive way. We keep a very close eye on what it’s digging up.

“There’s lots of little interesting things. Normally we find things that are masculine but in this area we’re finding things that represent the women in the country at that time,” Taylor says. The bead is a rare archaeological find because it’s a larger, more glamorous type than would normally be found in that context. An ornate brooch was also found in a rubbish pit layer dating back to around 1870.

He says any evidence of occupation in some areas was systematically demolished in the 19th century and then ploughed. Evidence of the 18th Irish Regiment, the last regiment on the hill has been found. And surprisingly the digger excavated rectangular trenches Taylor thinks were dug during World War II as defences against aircraft attack.

Click the image to watch the latest redevelopment video

He found a .577 bullet with marks on its tip that indicate it had been trapped in the barrel and a corkscrew type tool used to extract it.

“We found a hole full of rubbish, the only real rubbish hole we’ve found that’s connected to the occupation of this site. “A few pieces of china are sticking out and some window glass. They’re full of things people threw away so from that you can find out what they ate and drank and ate off, possibly where they had children and how old they were, what regiments they were in, all the details of their lives when you total it all up.”

After the British military occupation the area was occupied by squatters. It was Crown land and regarded as public land so people who didn’t have land just came and built a house there. That lasted about 10 years, he says.

Several archaeological studies in the park over recent years for construction work, including the footpath to the cenotaph in 2002, have revealed the area contains nationally important evidence of 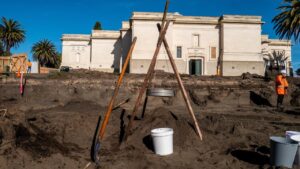 the Rutland Stockade (constructed 1846-47). It was one of the largest of at least 32 redoubts, stockades and blockhouses built by the colonial Government or settlers in the decade following Te Tiriti o Waitangi/the Treaty of Waitangi.

Although the hill was once a pā, little is known about Pukenamu’s earlier history. The site was a defensive position for the Whanganui River people, featuring in stories of battles between Māori before Pākehā arrived.

No evidence of Māori occupation has been found so far but the project’s cultural monitors, appointed on behalf of local iwi, have been working side-by-side with the archaeologist and remain ever vigilant.

Modelled on the pā hill-fort, the Rutland Stockade was on the high point and the hill’s eastern end, with a soldiers’ settlement on the northern part sheltered from prevailing winds. Early photographs and maps show several houses or huts were close to the Gallery extension and evidence found in the current excavation affirms this. The stockade blockhouses were used as a prison for a while and after the last troops left in the 1870s squatters took over and the area became known as “The Rookery”.

The Wanganui Girls’ School opened in 1879, behind where the Davis Library now stands, with part of the school’s grounds leveled by prisoners. After the school burned down in 1917 a second building was erected in 1921 to become the Queen’s Park School which had to be closed due to earthquake risk in 1972 and later demolished.

In 1882 the Wanganui Borough Council started a programme of beautification on the hill, which created much of the park’s landscape today and by 1887 what was left of the stockade was deemed derelict and finally demolished.

This article first appeared in the Whanganui Chronicle and NZHerald online on Tuesday 21 July 2020. See here.