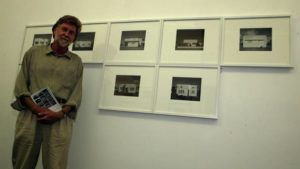 Laurence Aberhart with a selection of Whanganui homes, photographed in 1986.

A photographer with a tripod, head draped in a cloth, standing on the north mole at dusk will undoubtedly be Laurence Aberhart taking a long shot of the coastline he loves.

The first Tylee Cottage artist in residence in 1986 is back for the month of March and is enjoying the views and ever-changing atmosphere of Whanganui city and its landscapes.

“I like the way its history is still here – the river, Moutoa Gardens and all that – you can feel its presence. There’s something that’s constant that still exists here. It’s like Russell where I live. It’s a coastal place and still relatively isolated. There’s still enough of it that you feel connected to our historic past – the earliest European involvement is in Russell, and the Maori history dates way back both here and there.”

Aberhart’s surname is Germanic in origin and his more recent ancestors came to Aotearoa New Zealand in the 1840s.

“I’m a New Zealander. I have no connection other than being here and loving here – always loved here. A lot of what I do is sensing this thing or this place that won’t necessarily be here as it is forever… if I don’t notice it will it be remembered later on? Whanganui has always been very good for me photographically.” 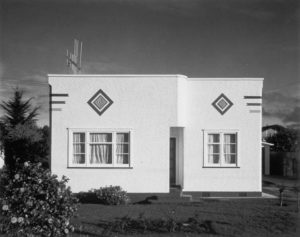 Aberhart, recognised as one of the country’s most technically accomplished photographers and visual artists, photographs buildings, interiors and landscapes, often with long exposure times.

He now refers to his method of photography as “analogue”, a term he would never have used during pre-digital times. He continues to shoot black and white film, his camera takes 10-inch negatives and he needs a dark room to process and print his photographs.

Unlike digital photography, which allows many shots to be taken and a selection made of the best, Aberhart says his technique requires him to be economical – getting it right in one shot, and making definite, emphatic statements. The materials are also costly.

“It’s frustrating but you don’t want to make mistakes because it is a waste of money, time and energy so there is an economy in what you do. And it’s not just economic it’s also visual. If you have done it properly why would you have to click the shutter again?”

He takes photographs after sunset from the north mole with Mt Taranaki in the distance, but the weather conditions have to be clement, as wind moves the camera.

“There are limited occasions with my type of camera. I point the camera up the coast and there is a very distant view of Mt Taranaki.

“It’s a very small element in a much greater scene. I like being out there. The photos are always taken at a very specific time just after sunset. So things like time and atmosphere come into play. It’s a nice exercise to continue with, not photographing it in the same way but always appreciating that the same thing can be vastly different.”

Aberhart grew up in Nelson in the 1950s, where he had an after school paper run and acquired a feel for the historic colonial buildings.

“Nelson was old in those days, like Whanganui, an old colonial town, not on anyone’s main road and had been quite preserved. So I knew what old towns felt like.”

He first came to Whanganui in the summer of 1967–68 and was struck then by the similarity to Nelson.

“Whanganui probably has kept more than Nelson but Nelson has made more of what it has so you get the feeling of an old colonial town, but that is based on less. There is so little left these days, so to preserve the good aspects has to be beneficial in the long run.”