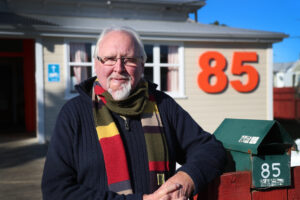 David Charteris says One of Those is told from the perspective of D’Arcy Cresswell, but also explores Mackay’s version and also the presiding judge, Chief Justice Stout.

One hundred years ago, shots rang out in the mayoral office on Ridgway St – now the premises of Meteor Office Products – and two lives were forever changed.

The then Whanganui Mayor Charles Mackay was charged and found guilty of shooting poet Walter D’Arcy Cresswell, who alleged Mackay had made homosexual advances towards him.

The story goes that Mackay panicked when Cresswell threatened to expose him. D’Arcy Cresswell, who was later known to be homosexual himself, sustained minor injuries and Mackay was sentenced to 15 years’ hard labour in Mount Eden prison for attempted murder.

Three events marking “The Wanganui Incident” have been organised by the Sarjeant Gallery as part of Whanganui Heritage Month.

“The Whanganui Incident” will be a discussion between Mayor Hamish McDouall; Mayor Mackay’s biographer Paul Diamond, and the playwright and actor David Charteris at the Davis Lecture Theatre on Friday, October 23 at 7.30pm.

The following days see performances of One of Those at Sarjeant on the Quay. Written and performed by David Charteris on Saturday, October 24 at 7.30pm and Sunday, October 25 at 4.30pm, the play examines the scandal and looks at the fallout for those involved.

Charteris says he first heard about the “Whanganui Incident” in the 1970s and returned to it while researching another play. 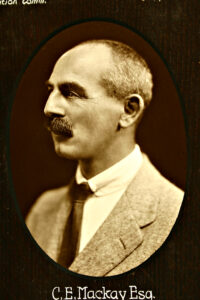 “I asked around and people had little or totally misguided ideas about this so I did more research and, with the help of Heather Burney’s brilliant research, reading Walter D’Arcy Cresswell’s diaries and days [spent] at the Turnbull Library, I was able to come up with this story.”

The play was originally commissioned by Four Seasons Theatre for the 2002 Whanganui Performing Arts Festival.

Charteris says One of Those is told from the perspective of D’Arcy Cresswell, but also explores Mackay’s version and the presiding judge, Chief Justice Stout.

“I wanted to show how the incident affected both men until their deaths. Mackay in 1929 and Cresswell in 1960.”

While Charteris wants the audience to grow with the characters and to not come to the show with pre-conceived ideas. He admits: “Cresswell was an absolute cad. Of course, cads are interesting to play and, while I can’t admire the man, I do have a grudging respect for him. The pursuit of fame was the catalyst for his adult life. His one dream was to have his poems engraved onto the rock face of the Southern Alps but his poems are dreadful.”

Charteris believes that Mackay was a man with a future not only locally but nationally and that “really annoyed the old guard of Whanganui. I feel great sympathy for Mackay. The way he was set up and then treated was disgraceful.”

The title of the play is taken from the phrase used early to mid last century when people were shy of using the word homosexual.

“It was generally a positive expression. Cresswell never revealed his own homosexuality during the trial but was quite open about it later in life.”

Charteris believes he and Mackay’s biographer Paul Diamond may share similar views but says Diamond has done more research on the period after Mackay was released from prison and went to Europe.

Jaki Arthur, Sarjeant Gallery relationships officer, says the gallery is excited to be presenting these events.

“There is still a lot of interest in Charles Mackay, not just because of this incident but prior to the shooting he was a very effective mayor for two terms. He was an advocate for the arts and championed the building of the Sarjeant Gallery.

“After the scandal, it appears everything possible was done to erase him from Whanganui’s history and his name was actually removed from the Sarjeant’s foundation stone. Many years later it was reapplied in gold by the artist Anne Shelton as part of her post-residency exhibition The City of Gold and Lead.”

Friday, October 23 at 7.30pm at the Davis Lecture Theatre.

Play: One of Those, The story of Mayor Charles Mackay, written and performed by David Charteris