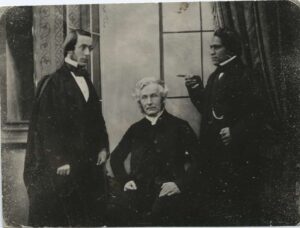 When Huia Kirk retired from teaching she knew she had “to do something to keep my brain going”. So she went to Massey University, gained a Bachelor of Arts majoring in history, and followed it up with a post-graduate diploma on Reverends John Mason and Richard Taylor, both Whanganui-based missionaries in the 1800s.

Richard Taylor is the topic of a talk at the Sarjeant Gallery on Sunday, October 18, at 4.30pm.

Kirk describes Taylor as “down to earth” and educated, with an MA from England’s famous Cambridge University. He became known as a man of knowledge and reason, and was consulted by many including both local settlers and iwi.

Taylor arrived from the UK in Whanganui (via the Bay of Islands and Australia) in 1839 and established an Anglican church at Putiki – the fifth rendition of which is St Paul’s Memorial Church, famous throughout New Zealand for its rich history and strikingly beautiful interior. Taylor ultimately established a large Māori congregation and began what would be many years of close interaction and consultation with local iwi.

“He didn’t try to flannel local Māori in any way. When something was asked, he gave the facts. He endeavoured to give his knowledge to everybody as respectfully as he could. Both he and Mason became known as effective mediators – and guided many conversations between the settlers and local Māori.”

Taylor is also famous in New Zealand for the role he played in scribing the local “edition” of the Treaty of Waitangi.

Kirk has read five of Taylor’s journals, copies of which are held at the Whanganui Regional Museum. She said she considers him a special person; very versatile and a good listener. He was an author, a theologist, an artist and a botanist with interests in zoology and geology.

“Taylor collected many specimens of New Zealand plant and insect life and samples were sent over to either [the Royal Botanic Gardens at] Kew or the British Museum.

“Both Taylor and Mason had received a basic missionary training in England but they had no idea what life would be like in New Zealand nor the amount of travelling they would have to do between the various chapels and schools they oversaw,” Kirk said.

“They didn’t know it was going to be as wet or as wintry as it was and initially they even regarded the indigenous peoples as uncivilised natives but Taylor’s attitude quickly changed and ultimately he held a deep respect for Māori and forged important relationships notably his friendship with Hoani Wiremu Hipango [a leading Whanganui chief].”

Reverend Taylor’s wife Caroline kept the home fires burning. This allowed Taylor to travel around checking on his region; the chapels and the schools.

“Taylor acknowledges that he would not have achieved as much as he did without her help. She ran the household, looked after the [six] children, made decisions when he was away so he had no hesitation when going on long trips by foot or waka or horseback into the wilds of New Zealand.”

Te Ara, The Dictionary of New Zealand Biography states that Taylor’s major achievement, along with Octavius Hadfield, was in “taking the heat out of much of race relations in the lower North Island”.

“Taylor’s influence was not only that of a missionary but also that of a man of wide interests and calming influence, who could relate to both his congregations as well as those who did not share his religious convictions.”

Jaki Arthur, relationships officer at the Sarjeant Gallery, will interview Huia Kirk and the talk will be illustrated by slides of paintings and photographs.

• Richard Taylor Revealed; Sunday, October 18, 4.30pm – A Whanganui Heritage Month event. The event is free, but please book a seat by calling 06 349 0506 or popping into the Sarjeant