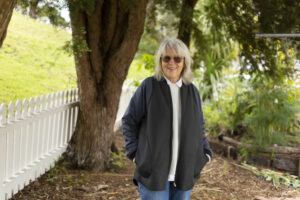 Anne Noble, back in Whanganui and at Tylee Cottage.

Anne Noble, distinguished photographer and professor, is back in her hometown of Whanganui as the Tylee Cottage artist in residence. She will give an illustrated talk, 7.30pm, November 11 at Sarjeant on the Quay, discussing recent projects that explore human relationships to the natural world.

Noble is a Tylee alumna and was the fourth resident artist in 1989 following Laurence Aberhart, Andrew Drummond and Mervyn Williams. At that time she worked on several projects, some of which she will revisit over the next three months at Tylee Cottage.

“I think that is the real benefit of the residency – giving time to do research and have a more thoughtful, response to the development of new work. I often work on projects for three to five years so I’m here to begin a new project, and I have time to spend meeting and having conversations with people. I’m looking forward to that,” Noble said.

Her talk will present recent work imagining and representing the forest, and show some of her work about bees that was exhibited at the Asia Pacific Triennial of Contemporary Art in Brisbane in 2019

Noble is interested in exploring how we perceive and understand the natural world from our position as separate and independent beings, work she will continue during the residency.

“It is interesting to imagine and make images of a forest based on ideas of invisible networks and connections. I look for ways to imagine or shift our perception of things so I will be doing a lot of looking, doing video work and finding ways to make images using photographic technology that you cannot see.”

Noble has created images from film buried and left underground for four or five months. She then developed the film and produced scanned images from whatever strange chemical interactions happened during that time of gestation.

She also uses hunters’ cameras, stalking images through the forest at night and will experiment with any form of light sensitive technology.

“I use anything. I don’t see a division between analogue and digital – photography is an ever-expanding series of imaging technologies. I have no reverence for one over the other. You can use your hands as a camera if you have light sensitive material.”

Noble has also spent time on the volcanic plateau revisiting one of her earlier projects, looking at the upper Whanganui River catchment area and researching the development of the Tongariro Power scheme that resulted in a massive water engineering project.

“My primary interest is in the visible presence of the Tongariro Power Development project – and its place in the surrounding landscape, which I am looking at in the light of changing contemporary cultural relationships to land and place. This particular history of the central North Island catchment area is fascinating.”

Noble’s family is from Whanganui and she grew up alongside the river, not connected by blood to the Whanganui River people, but rather connected through a feeling of belonging to this body of water.

“It is very much my awa and while I think the first project I did looking at the Whanganui River in 1982 was a very personal journey to identify my own sense of belonging to this place. I am much more interested now in the contemporary politics of our relationship to land and place.”

She sees a river system as having some similarities to a colony of bees. Working with them as both artist and beekeeper enabled her to see, feel and understand that, and to want to speak more about the complexity of relationships within the environment.

“We have a shrinking biodiversity largely through human impact on the environment and bees are like an indicator species to such an extent that what is happening to bees is likely to happen to us. If we see and feel ourselves as more closely connected to the world we inhabit rather than as separate individual entities, that may influence how we interact with the environment – maybe.”

• Anne Noble will give a talk at Sarjeant on the Quay on Wednesday, November 11 at 7.30pm. Free, all welcome.

This article first appeared in the Whanganui Chronicle and NZ Herald online on 10 November, 2020