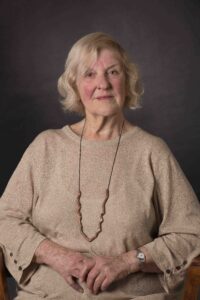 Whanganui has a long tradition of talented potters, among them tutors who have passed on their skills and inspired upcoming generations. The works of six of Whanganui’s celebrated potters are showcased in the exhibition, Lighting the Fire: Whanganui potters from the Sarjeant Collection at the i-Site gallery on Taupō Quay until 22 November.

The exhibition acknowledges the potters’ contribution to ceramic practice in New Zealand and gives a rare opportunity to appreciate their collective skill and creativity.

Over the years these potters have nurtured and influenced generations of students at various Whanganui ceramic schools, and some of them are still teaching today.

April Pearson was introduced to pottery with Doreen Blumhardt at Wellington Teachers’ College during her primary teacher training in 1962. After marriage and motherhood April took up pottery again with Agnes Smith. Pearson has worked with school children, primary, secondary and tertiary students, and various community groups including blind, disabled and elderly people.

“I felt like a travelling salesman taking my bag of ticks everywhere. It was quite a challenge to come up with ideas that had relevance and enjoyment.”

She was also part of the Whanganui Collegiate arts programme for 12 years and involved with the Whanganui Community College since 1985. In 1986 she took on two weekly community classes.

“[People] were very brave, doing something they had always wanted to do but had been told they were absolutely useless at art. For them my job has been to build confidence. They are not going to be marked out of 10 for their work or told that their piece is rubbish. Some people were absolutely amazed at what they could do – I made that!”

In the mid ‘90s Pearson joined the Ceramics Department Staff at Whanganui Polytechnic.

“Teaching expanded your mind and experience. It pitched me into researching and teaching different techniques and new clays such as terra sigillata, rubber latex, soluble salts, saggar and saw dust firing and basic, essential methods in pot construction – a wonderful introduction to new possibilities in my own work.”

Rick Rudd, awarded Member of the New Zealand Order of Merit 2020 for services to New Zealand Ceramic Art, says Lighting the Fire is an interesting way to look at ceramics in Whanganui from the tutors’ perspective.

“Whanganui has had a collection of really good tutors, several of them nationally recognized and makers in their own right. A lot of the tutors have taught the next generation of potters [for example] Ross Mitchell-Anyon taught two very well-known potters – Paul Maseyk and Martin Poppelwell.”

The exhibition at the Sarjeant connects well with the Quartz Museum and the “made in Whanganui room” which is a permanent exhibition show-casing different potters.

Rudd says he taught pottery mainly through the part time night classes at the community college and he has also taught weekend workshops around New Zealand at summer schools.

“I have always taught the techniques that I use – pinching and coiling basically. Since the year 2000 I have been taking classes through the making of a teapot and that includes just about every technique I have ever used because there are so many components to it.”

He gives teaching his all, making it a memorable experience for students.

“If you’re not drained you haven’t done it right. I get people coming here saying – Oh I went to a workshop of yours 20 years ago.”

Rudd says Whanganui’s tradition of ceramics started with Mavis Jack – the older sister of Sir Roy Jack, a former Speaker of the House of Representatives.

“Mavis trained in England and later moved to Whanganui starting a supply company for kilns, clays and stains in St Johns Hill which supplied the whole of New Zealand. A piece about her called ‘A Studio Potter’s Point of View’ was published in one of the first issues of New Zealand Potter in 1959. ”

Rudd notes that Whanganui has just gained up-and-coming potter, Oliver Morse, winner of Rudd’s first emerging practitioner award, and that there is currently a resurgence in ceramics, both nationwide and worldwide.

Lighting the Fire, Whanganui potters from the Sarjeant Collection from 4 July – 22 November 2020

This article appeared in the Whanganui Chronicle and NZ Herald online on Wednesday 7 October 2020.