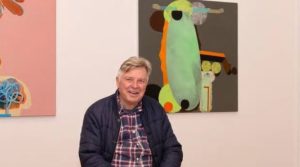 Denys Watkins: Dynamo Hum is on at the Sarjeant on the Quay until August 25.

Dynamo Hum, a current exhibition of brightly coloured, abstract paintings by Denys Watkins, brings a zestful, joyous tone to the walls of Sarjeant on the Quay.

Watkins’ inspiration for the title of the show relates to the pedalling hum of a bicycle, used to create electricity and light.

A highly respected artist, Watkins is also a musician, and while he says the relationship between his music and painting is not obvious, he suggests his painting is a bit like the tones, textures, spaces and sounds of jazz improvisation but using forms, shapes and colour instead.

“It’s like playing music without a score. Painting builds itself up. I don’t work from preparatory drawings; I just do them. It’s the physicality of making it. I put a colour down then I’ll pour some paint on it and build structures like building blocks. Sometimes it works, sometimes it doesn’t; sometimes I’ll add things or take things away. I try to create volumes and colour and spaces that have what I call shallow space, so there are things floating in front of other things.”

Some of the titles of his paintings are drawn from music album covers and poetry. The paintings may also contain elements that represent organic forms such as terrestrial and undersea plants and geometric shapes that relate to human-made technology.

In No Ordinary Sun, which is named after the Hone Tuwhare book, there is a tangle of plant roots and brick like structures.

“Someone had given me a large amount of orchid roots. I had a stack of them and used them in two or three works as I had them in the studio, so that’s a representational element in the painting. And I used a structure on the inside which could be interpreted as a pile of bricks, but it’s not really a pile of bricks it’s just a series of colours that I manipulated to look like that with those forms around it. I did a series of water colours that relate to this type of thing where I used poetry book jacket covers that I had digitally printed from the 1960s and I put water colours inside them.”

And the title of the painting Meat Science is from 1960s beat poet Michael McClure’s Meat Science Essays. A curious little rabbit creature crouching in a corner holding a “Help” sign he says has echoes of Hieronymous Bosch and the presence of evil. Another representational element in another painting is a moa bone with the identification tape attached.

Watkins says many of his paintings are about the act of painting but his work is also “quite traditional”.

“I’m very aware of the history of art and of painting. I’m also very conscious that I want to make things that look good and are treated with a certain precision and knowledge of how the materials work. It’s part of my lower-middle class Protestant work ethic.”

He says he has a sense of “suburban surrealism” and of the natural world, evident in the organic sensuality of his paintings. As a boy, living in the suburb of Island Bay, Wellington he revelled in the marine environment of south coast – “the sea was ink blue and cold, with swirling giant kelp, and you could stretch under the rock shelves and pick off paua.”

Disciplined, Watkins usually works in his studio every day, as well as gardening, playing golf and watching Netflix.

“This is my job. If I don’t do it for a while I go a bit cranky. There is a certain therapeutic element.”