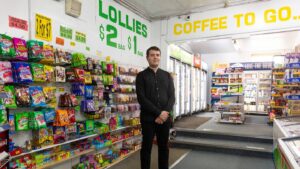 An icon of Kiwi culture, the corner dairy is the subject of an object-based art exhibition at Sarjeant on the Quay’s i-Site gallery. Curated by James Hope, Corner Dairy offers a nostalgic, funny, and at times satirical evocation of the shop that has been a valued part of New Zealand’s social fabric since the early 1900s.

Hope’s inspiration for the exhibition came when driving one day through Gonville.

“I was driving past the dairy on Alma Rd. The sun was setting and there was this big yellow sign that said ‘Open’ and it was all lit up. This one is a big two storied, wooden dairy; people live up the top and the dairy is on the bottom. It seemed like such a classic Kiwi scene to drive past. So the idea evolved from there.”

Hope also gleaned information from the documentary The Changing Face of the New Zealand Dairy shown on Prime Television early this year, and available on YouTube.

“It told the history of the dairy and the sorts of issues they are facing nowadays such as violent crime, taxes on sugary drinks and cigarettes and the competition from supermarkets. So the documentary formed a good part of my research.”

Early last century, shops known as “dairy produce sellers” were the only ones allowed to sell milk, cream, butter and cheese and were the first permitted to open on Sunday the documentary explains. During the Depression some cash-strapped, entrepreneurial Kiwis converted their houses into shops and Indian migrants expanded their fruit and vegetable stores to sell other groceries. These shops became known as “the dairy” and have been a cornerstone of the suburban lifestyle.

So who hasn’t walked, biked, scooted or driven down to the corner dairy for an ice cream or bag of chips, or to grab a bottle of milk or loaf of bread when the family is caught short?

A bike and scooter, salvaged from the dump and renovated by artist Scott Eady as part of a larger artwork invite the viewer to “jump on” and visit cabinets of dairy Kiwiana such as ceramic milk bottles and “plastic” cups with a twist. The “cornerstone” of the dairy perches above out-sized, screen-printed K-Bar wrappers. There are melting ice creams, a cabinet full of ceramic crisps, Grain Waves, Cheezels and Smarties.

Lauren Lysaght’s work, The Wild Bunch, are “flowers” that sport names such as Needy Weed, Climbing Prospect or Budding Statistic. The flowers reference those sold by dairies, but are made 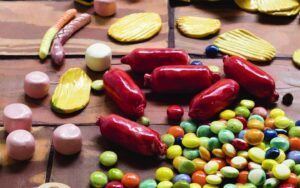 from colourful bandannas similar to ones worn by gang members. They could also represent facemasks worn during violent robberies. “There are on average five aggravated robberies in dairies every month,” states a 2018 report “Does the dairy have a future?” published by Retail NZ.

Gina Matchitt’s work Te Wharewhero (The Warehouse) is a red bag from the series Where Everyone gets a Bargain, in which she explores the effects of commercialism and globalisation on Māori culture. Does this also apply to the dairy and does it need to be protected from the homogenising effects of big corporation consumer culture?

Colourful, exciting and nostalgic, the exhibition poses questions, mixing the sweet with the sour, flavoured with the spice of imagination and provocative thought.

Hope leaves the Sarjeant in January when Jessica Kidd returns from maternity leave. He says he has enjoyed his time as part of the Gallery and felt at home very quickly in Whanganui. He was also thrilled to see work start on the redevelopment of the Gallery.

“I’ve really appreciated my time here and learned a lot working at the Sarjeant. Everyone has their own role but you can work across things and help out on different projects. I will definitely come back for the opening of the Sarjeant at Queen’s Park.”

Corner Dairy is on display at the Sarjeant’s object gallery above the i-Site until March 28, 2021.