The voices of science and art have joined to produce an exceptional exhibition Te Awa Reo, showing at the Sarjeant Gallery until February 14, 2021. Fourteen artists responded to scientific research of an 8.75 metre core sample of sediment taken from the Ātene Meander on the Whanganui River.

The June 2015 flood was the catalyst for the research and the earth samples taken, with permission from iwi landowners, provided 2000 years of evidence of past floods in the Whanganui flood plain. 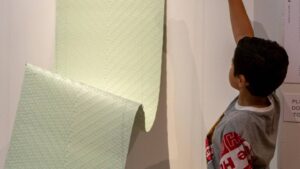 A young art lover measures up to the art work Drape by Alexis Neal which is part of the Te Awa Reo exhibition at the Sarjeant. Photo Supplied

This included a massive flood at the time of the Taupo eruption 1800 years ago. The samples, rich in organic material were carbon-dated to provide an age estimate at different depths. An ITRAX core-scan gave high-resolution readings of the material’s chemistry to determine flood events.

All 14 artists have an educative and/or personal connection to the Whanganui River as either past Fine Art tutors at the local Polytechnic or locally based practising artists. Jude Macklin, wife of Professor Macklin, was an artist in residence at Pakohe Whanganui for 8 weeks in 2017.

Vreede said the scientists were very open to being part of a project that would bring art and a spiritual, Māori worldview together with the scientific perspective.

“That made it a lot easier. For me there is definitely a Māori worldview and I am totally blessed with that. But that worldview is not exclusive, it is inclusive of everybody, and that very simply for me is our human connection back to Papatūānuku.”

She said the now famous saying, ‘Ko au te awa, ko te awa ko au’ [I am the river and the river is me], expresses the at oneness people feel with the river.

“You can tell that the artists understand what it is like to be an integral part of the river, and they are telling the story in their own way.”

When the project began in 2016 Vreede invited artists from around Aotearoa. She then organised a wānanga (seminar), the first of four, where the scientists showed the core samples to the artists.

“They were stunning and knowing that in that 8.75 metres of earth was a 2000-year journey was just magic. That was the initial inspiration needed for the artists to participate in this project.”

She said she has “a newfound, informed respect for the scientific voice. Ian and Mark gave us an opportunity to know more about what the land is doing. It’s not static, it is moving all the time”.

Fuller said conversations with Marty and Marilyn Vreede gave the researchers a new appreciation of peoples’ connection with the awa, and they were able to marry this with their scientific approach. He said the artistic interpretations took the scientists beyond the detail, giving a more holistic view of the core and ways of appreciating its intricacies and beauty.

“The Whanganui has been identified as a river with rights and as a living entity. That is in fact the way we scientists understand our river systems – as dynamic entities in the landscape connected with their catchments. They are not just conduits of water.

“I certainly learned a lot from that collaboration and gained a new perspective. It was a very positive interaction and something I haven’t had before. I think it has enriched the scientific approach. Science is all about pushing the boundaries and exploring new dimensions, different paradigms. I think it is important we not get fixed in one particular paradigm in the way we understand the world and the earth and its history.”