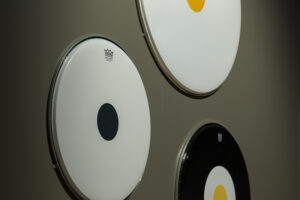 “What it is not” is, at first glance, the somewhat enigmatic title of a new exhibition at Sarjeant on the Quay.

But the exhibition of abstract art from the gallery’s permanent collection, could not be better named.

Exhibition curator Jennifer Taylor Moore says the title comes from a quote by American abstract painter Ad Reinhardt: “The only way to say what abstract is, is to say what it is not.”

Taylor Moore says, “Abstract art is a large all-encompassing term, a very broad definition that covers an extremely wide range of work, and I think he sums this up very well, by stating that it is easier to say what it isn’t rather than what it is.”
Beginning in Europe in the early 1900s, abstraction flourished in 1940s post-war New York with the rise of abstract expressionism. In New Zealand, abstract art began in the 1950s and the show includes the early pioneers of New Zealand abstraction, Gordon Walters and Milan Mrkusich.
In making her selection Taylor Moore wanted to show a breadth of styles of abstraction, such as the more geometric work by Stephen Bambury, abstract expressionist work by Allen Maddox, and the colour field abstraction by Geoff Thornley.

“With this work the space around the artwork becomes just as important as the objects themselves and the drum skins, completely removed from their original context, becomes a visually striking composition of concentric circular forms.”

“When you initially approach an abstract artwork, it can be easy to say, “Oh well that is just a piece of paper covered in green paint”, however when you look closer at Milan Mrkusich’s Chromatic Suite I No.4 you can see a tiny dot of red amongst the field of green.

“What this red dot does is create a contrast with its complementary green colour and creates an illusion of depth as it visually pops forward from the background. I find it fascinating how a work that appears to reject the representation of depth, through the intentional use of colour creates the illusion of depth anyway.”
She also loves the subtlety of Stephen Bambury’s etching titled Grey Transmuting, in which two apparently identical black squares are slightly different dimensions.

“This generates a very slight distortion and makes you question what you are viewing. Another work I really enjoy is Judy Millar’s 2002 untitled oil and acrylic on aluminium. I love the freedom of the movement of the brushstrokes and the muted palette. I’m delighted we have this work in the collection as it is our only major example of her work.”

There is an unexpected work by Alan Uglow, a British visual artist who moved from London to New York in 1969 where he became well known for his objects, sound and visual installations as well as photographs and prints.

Another point of interest is a work by Simon McIntyre in the abstract exhibition called Split. Simon is the brother of Sara McIntyre whose exhibition Observations of a Rural Nurse is showing at the Sarjeant. Their father is the painter Peter McIntyre.

“Simon’s work is a painted wood construction, which is a little different to the other works in the show. It explores the subtle relationship between natural wood and painterly processes related to formal geometric abstraction.”

This article first appeared in the Whanganui Chronicle and online at NZ Herald on 28 Jul, 2020. See here