Posted at 09:30h in Media Releases by Officer
11 Likes
Share 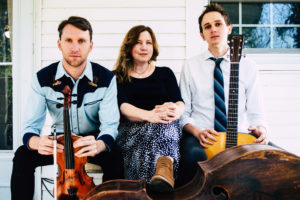 The Sarjeant is bringing the Missy Raines Trio to Whanganui.

The Nashville-based Missy Raines Trio, headed by award-winning bassist Missy Raines will play at the Whanganui Musicians Club on Sunday.

The concert, presented by the Sarjeant Gallery is part of the trio’s Australia/New Zealand tour.

“Music has been a driving force, something that I have spent my time thinking about and wanting to create ever since I was a little kid.

“I love to hear it, I love to make it and hear other people make it. I love the interaction with other musicians. You can do it by yourself but it is really a lot of fun to play with other people.

“That is where a lot of the magic can be – that dialogue with other people – and, of course, you never know what it’s going to be like.”

Raines began writing instrumentals several years ago, motivated by the sights, sounds and experiences from the road, and from personal experiences with family or friends.
Her favourite instrumental composition, Ides of March, is about the loss of her father, “but also built in to the melody is a sense of hope and light that I believe always follows heartbreak.”

More recently she has been writing songs, again drawing on her family roots, the environment and her journey through life.

“I mostly write about the experiences that I have had – it’s a sort of therapy maybe. I’ve suffered a great amount of loss within my family and so I find myself writing about that and, in some ways, maybe working on relationships or carrying on conversations with them in the only way I still can.”

The Missy Raines Trio, featuring acoustic guitarist Ben Garnett and ex-pat Kiwi fiddle player George Jackson, will play her version of bluegrass, which is influenced by other genres such as country, rock and jazz.

Jackson is living his longtime dream of being a working musician. Born in Christchurch, he moved to Australia then to Nashville in 2016. Jackson’s parents were fulltime folk musicians in New Zealand and he too felt drawn towards a career in music.

“I definitely wanted to challenge myself to work to the highest professional standard that I could and make a living.

“I could do this elsewhere but it is absolutely satisfying to do it in the home of bluegrass music – the largest pool of music and musicians and the biggest opportunities.”

Bluegrass is string band music that combines European and African musical influences.
“I think American music is very compelling and exciting because it brings together those elements.”

The concert promises to be just that.

Jackson will be revisiting familiar territory in Whanganui.

“I’m excited to be playing in Whanganui. I lived in Marton for two years and my grandparents lived in Feilding. My granddad (in his early 90s) and great-uncle Sid may come to the show.”

Raewyne Johnson has worked with Nashville-based Vanessa McGowan, of Tattletale Saints, to trio to Whanganui and says “because these concerts usually draw large audiences, Sarjeant on the Quay doesn’t always have the required seating capacity so The Musician’s Club is a great alternate venue”.