By Liz Wylie, Reporter for the Whanganui Reporter. 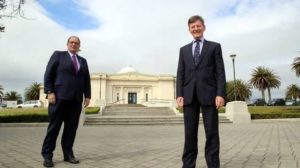 The Sarjeant Gallery Trust has a new member with some impressive credentials.

Chris Finlayson QC is a former Attorney-General, Minister for Treaty of Waitangi Negotiations and Minister of Arts, Culture and Heritage with the previous Government.

Finlayson said he is delighted to have accepted an invitation to join the trust and believes people who begrudge the money spent on the gallery’s redevelopment are wrong.

“When visitors come to a city, one of the first things they ask to see is the local museum or art gallery.

“They don’t ask to visit the local sports stadium.

“There will always be naysayers who don’t like money being spent on these sorts of projects but they are wrong.”

Finlayson said “The Sarj”, as he calls it, is dear to his heart.

“I love the building, the collection and the people and it is a thrill to think I can help to build the foundation for the next phase of its life.”

Although Whanganui is a favourite destination for Finlayson, he will not be visiting too often.

“I am mindful of reducing my personal carbon footprint so most of my communications will be via Zoom or Skype.”

Finlayson spent a lot of time in Whanganui in his role as Minister for Treaty of Waitangi Negotiations.

The signing of the Whanganui River Treaty settlement at Ranana in August 2014 was the culmination of 10 years of on-and-off negotiation and 130 years of litigation between iwi and government.

“I negotiated for many years with the late Sir Archie Taiaroa and was greatly saddened by his death in 2011.”

The new Sarjeant Gallery annexe will be named for the former Whanganui River Māori Trust Board chairman and Finlayson said it is another reason for his delight at being involved.

“His work and legacy will be remembered in the new wing – the Pataka o Sir Te Atawhai Archie John Taiaroa.”

Finlayson was the bearer of good news for the Sarjeant redevelopment in 2016 when he announced a Government contribution of $10 million towards the project.

The Sarjeant is a gallery “that makes other much larger centres green with envy”, he said.

When Finlayson resigned from Parliament in December last year, the New Zealand Herald’s deputy political editor Claire Trevett was able to express the view that he was one of her favourite politicians and praised his negotiations of Treaty settlements.

“He re-invented the process, giving iwi and officials leeway to come up with solutions to problems that may have once seemed intractable,” she wrote.

“The arrangement with Tuhoe over Te Urewera was one example. The legal status accorded the Whanganui River was another.”

“There is a saying that the topic is ‘hot’ overseas and ‘not’ in New Zealand.

“I am still getting calls about it from other parts of the world.”

Since leaving Parliament, Finlayson has been swamped with requests to lend his hand to various projects and causes.

“I have to be selective but I’ve chosen some really interesting ventures.

“I’m involved with The Adam Chamber Music Festival in Nelson and another project I’ve joined is The Archibald Baxter Memorial Trust.

“The trust wants to build a memorial to conscientious objectors in Dunedin.”

Finlayson is also working on a book which does not have a title as yet.

“It is about the Crown’s relationships with Māori and the cover will be an artwork by Tame Iti.”

Finlayson said the Tūhoe leader was happy to oblige when asked to supply an example of his work.

And does Chris Finlayson have a favourite artwork among the Sarjeant collection?

“There are so many beautiful works at the Sarjeant but one that springs to mind was in an exhibition last time I was there.

“I think it was named something like Suburbs of Wellington but I can’t recall the artist’s name.”

The painting Finlayson refers to is A Wellington Suburb painted by Roland Hipkins during the 1920s. 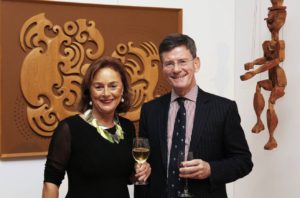 Finlayson said he looks forward to becoming more familiar with the entire Sarjeant collection and working towards the restoration.

“One of my tasks in the years I am on the Sarjeant Trust Board will be to help build up the Sarjeant Foundation to assist with major exhibitions, conservation work and further art acquisitions so that this gallery continues to be among the top ranking of galleries in New Zealand.

“I very much look forward to that wonderful day in 2022 when the Sarjeant on the hill is reopened.

“I confidently predict that on that day there won’t be one negative comment other than, perhaps, ‘What took you so long?’ ”